How Stephen Curry Beat Everyone For NBA MVP 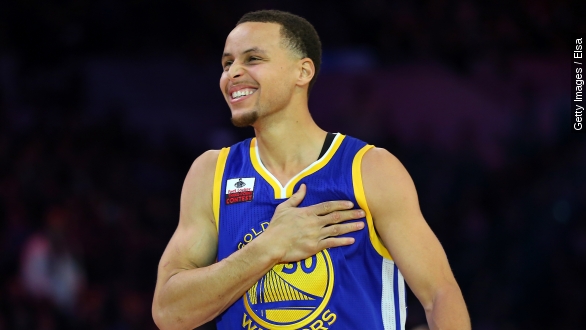 It's official — Golden State Warriors guard Steph Curry is the NBA's MVP, and we all saw it coming.

From his dominance beyond the arc, to his league leading steals, to all the meme-rable moments in between, this race was Curry's to lose.

"He's been so electric and so great for the best team in years in the NBA, that, to me, I have to go with my vote Steph," CBS Sports' Doug Gottlieb said.

"The boy got a handle. He can get loose. He can shoot from anywhere. You are literally petrified of Steph Curry from the moment the ball gets past half court," ESPN's Stephen A. Smith said.

Curry's been a prolific scorer and more than capable floor general in the NBA ever since Golden State drafted him out of Davidson College, but this is the first year that his talent really grabbed everyone's attention. For the MVP award, past winners LeBron James and Kevin Durant left the door wide open for a new contender.

"I can't step down on my foot right now. I can't put weight on it," Durant said.

Durant's foot knocked him out of contention after the nagging preseason injury forced him to hang 'em up for the season in March.

James, on the other hand, did play most the season. Nagging back and knee injuries knocked James out for two weeks, potentially hurting his chances. And while he's been good, he hasn't been great. James finished behind Curry in field goals, assists and total points.

Curry and the Warriors are currently playing the Memphis Grizzlies in the NBA Conference Semifinals after sweeping the New Orleans Pelicans in the first round.

This video includes images from Getty Images, music from David Peck / CC BY NC 3.0 and statistics from Basketball-Reference.com.