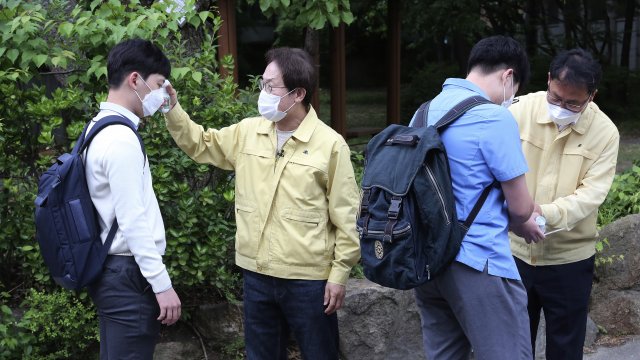 SMS
How South Korea Contained The Coronavirus
By Ben Schamisso
By Ben Schamisso
May 27, 2020
The nation had one of the world's first outbreaks but quickly managed it thanks to radical tracing and isolating measures, and self-discipline.
SHOW TRANSCRIPT

It's back-to-school time in South Korea.

The nation's reopening practices — for schools, professional baseball, concerts and more — are being closely watched by other countries.

South Korea has been an object of international admiration ever since it contained one of the first COVID-19 outbreaks outside of China.

So how did it do it?

"The use of masks is something that people really followed from the beginning. Many people were staying at home on a voluntary basis," said Stephan Klingebiel, the director of the United Nations Development Program Center in Seoul.

He points to self-discipline and efficient testing and tracing measures. He was himself tested for the virus when he flew to Seoul at the end of March.

"At the end of March, testing capacities in many countries, there was really a limitation. And the Korean government did it for all arriving passengers," Klingebiel said.

Klingebiel received overnight accommodation and food while waiting for his test results, which came back negative the next morning. The government also asked him to download two apps to report his movements and health status during the next 14 days of quarantine.

"So when I was late, for example, I received a call from those ministries and I was asked to to really submit my latest data," he said.

Like Klingebiel, Minho Kim was tested for the virus when he returned to South Korea from Chicago, where he was an international student.

"They put us in a hotel, they got us free testing and they gave us food after that," Kim said.

Besides testing and tracing, Kim says South Korea's successful COVID-19 response comes down to the population's willingness to trust the government with special powers in a time of crisis.

"One thing that is being overlooked is how much South Korean citizens are willing to sacrifice their personal liberty just a little bit to have everything under control," Kim said.

For example, the government sends emergency texts alerting citizens of nearby cases of the coronavirus.

"I get these texts all the time," Kim said.

The whereabouts of every single confirmed patient is also available to the public.

Another radical measure is how the country controls the price, supply and demand of masks.

"We can only get three masks a week. There is actually a day that you can get masks according to your date of birth," Kim said.

But at the end of the day, Kim says it's all about South Koreans doing their part to keep the virus at bay. That also helps explain why South Korea never needed to impose a hard lockdown in the first place.

"People understand that it's not just a one-man endeavor. It's something that the whole community has to engage in."