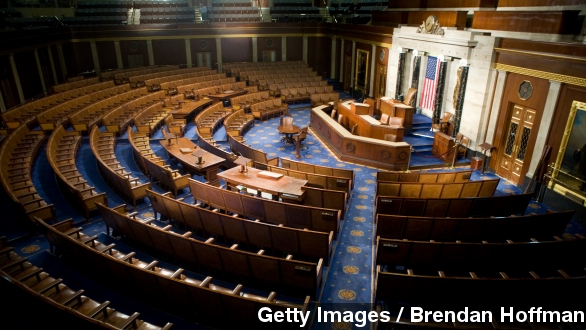 SMS
How Small Group Of GOP Women Blocked 20-Week Abortion Limit
By Cliff Judy
By Cliff Judy
January 22, 2015
In one of the House GOP's first chances to challenge President Obama, a controversial abortion limit never even made it out of the chamber.
SHOW TRANSCRIPT

Well, that didn't take long. In one of its first chances to go head-to-head with President Obama, and backed by a fully Republican-controlled Congress, the House GOP found out not all conservative agenda items are easy to push.

It was the last agenda item mentioned Tuesday just before the House wrapped up for the day to prepare for Obama's State of the Union.

"To protect pain-capable unborn children and for other purposes," one congressman read. (Video via C-SPAN)

That is, until late Wednesday ...

"We don't have the graphic? Oh, we've just got the headline," MSNBC host Rachel Maddow said. "House GOP drops plan to debate abortion bill after revolt by GOP women and others. GOP women!"

Yes, GOP women. The proposal, House Resolution 36, drew revolt from several angry Republican members who opposed the provision that even rape survivors would not be able to get an abortion unless they reported the crime to police.

The GOP women, initially led by Rep. Renee Ellmers, met with leadership Wednesday and argued that provision could have a chilling effect on crime victims and would hurt the party's chances to increase support from women voters.

"Were emotional, we're told. They kicked staff out of the room, really pushing back on this requirement saying it's not fair," CNN's Dana Bash said. "We're going to have a really interesting bit of tension."

"That's what happens when you let 22 women into the Republican caucus."

Now, let's not kid ourselves. President Obama had already promised to veto the bill, and it had no chance of passing as long as he's still sitting in the Oval Office. (Video via The White House)

But GOP leaders considered it an opportunity to put a conservative issue on the president's desk anyway, and the annual anti-abortion March For Life is scheduled for Thursday, too. (Video via Fox News)

Several outlets said this still wasn't a good look for Republicans, though. National Journal noted this was the third straight week with significant policy infighting within the party.

"As Rep. Charlie Dent, a longtime leader of GOP moderates, put it Wednesday: 'I just can't wait for week four.'"