How Shonda Rhimes Is 'Normalizing' Television 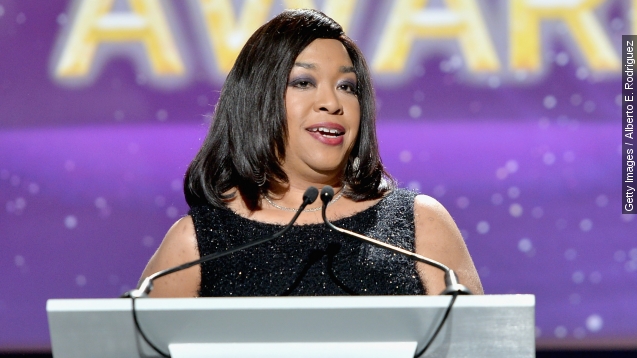 As if she wasn't busy enough, TV super-producer Shonda Rhimes has sold another show to ABC. The new show centers on military doctors during the Iraq War.

This is the third show Rhimes has sold to ABC just this year. In addition to her massively successful shows from #TGIT, Shondaland has a divorce comedy, a drama about a fraud investigator and a drama about nuns — yes, nuns — in development. (Video via OWN, ABC)

Now, we don't know much of anything about the new show, but what we do know is that it will once again be a master class in "normalizing" television. What the heck does "normalizing" mean? Well, let's turn to the expert.

It's Rhimes' word for what most of us call diversity. She says, "I have a different word: normalizing. I'm normalizing TV. ... I am making the world of television look normal."

When Rhimes wrote her first hit, "Grey's Anatomy," she never specified the races of the characters, even telling her casting director to "cast it the way you see the world." (Video via ABC)

But with her next hit, Rhimes wanted a show with a black woman as the lead, partly because Olivia Pope is based on an actual black woman, and it became the first time in almost 40 years a black woman has led a network show. (Video via ABC)

"To me, it feels like these are the roles black women should've been playing all along. We all know black women are complex, talented women anyway, and it's nice to see that everybody else is seeing it too," Rhimes told Essence Magazine.

And with another black-woman-led show, "How to Get Away With Murder," Rhimes cemented herself as one of the most prolific showrunners in history. ABC has even given her an entire night of prime-time programming. (Video via ABC)

Through her shows, Rhimes is showing us the world we really should be living in. A world where it's not surprising an Asian woman is the most impressive surgeon in her class or where powerful black women can be in interracial relationships and no one bats an eye. It's a world where these things are, well, normal. (Video via ABC)

Interestingly, Rhimes' shows don't often explicitly deal with race; usually it's the characters who help lead that conversation. Take probably the most well-known scene from "How to Get Away With Murder," when Viola Davis takes off her makeup and wig at the end of the day. It's a scene that caused people to talk about race and beauty, while the character is just being herself.

Rhimes is leading the "normalization" charge by making sure her characters look, sound and act like someone you would see on the street. She says, "The goal is that everyone should get to turn on the TV and see someone who looks like them and loves like them."