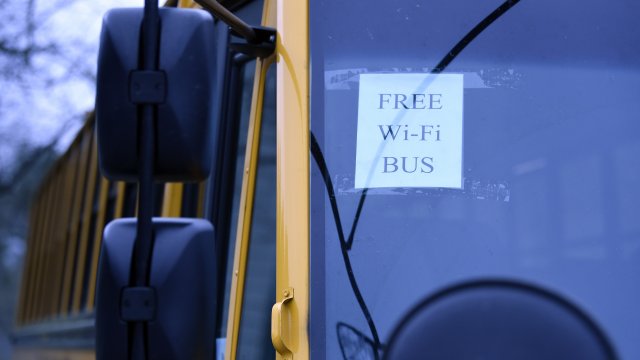 SMS
How Are Schools Dealing With The Digital Divide?
By Amy Morona
By Amy Morona
April 2, 2020
School districts nationwide have canceled classes for at least part of the academic year in light of the coronavirus pandemic.
SHOW TRANSCRIPT

School districts nationwide have canceled classes for at least part of the academic year in light of the coronavirus pandemic. The instruction has mostly shifted online. But how do students access digital lessons if they don't have a stable internet connection at home?

"I've had tons of stories told about parents who are pulling up to the parking lots of their neighborhood schools to tap into their Wi-Fi, or sitting out at McDonald's trying to get access by sitting at a table," said Nicol Turner-Lee, a fellow with the Brookings Institution's Center for Technology Innovation. "In some communities kids have done it so much that they've changed the hours and the policies for those kids to actually sit there. So that's what the experience looks like when you're not connected."

Turner-Lee has spent years studying what's been called the "digital divide," or the gap between those who have consistent access to technology and connectivity and those who don't. Roughly 11% of Americans don't have a computer at home, and nearly 20% don't have a broadband internet connection, according to the most recently available census data.

Rural and low-income students can be the most affected. A 2020 Michigan State study found young people living in the state’s more remote areas who don't have internet or can only access it using a cellphone have lower GPAs than their connected peers. They are also less likely to attend higher education.

Those researchers found that the gap could cause ripple effects that can impact kids' whole lives.

Schools nationwide are getting creative in an attempt to bridge that gap. Many are offering packet pickups of paper lessons for students to do at home. Districts in South Carolina and Florida have turned parked school buses into Wi-Fi hotspots. Any students within a certain radius of the vehicle can connect to its internet.

Students in one Alabama district can register to get a personal hotspot, and public TV stations in Ohio are now airing at-home learning programs throughout the day.

$13.5 billion in total funding was earmarked to help K-12 schools navigate the pandemic as a whole, though it didn't provide dedicated funding for an existing Federal Communications Commission program that helps schools expand their internet access.

But that could change in the next stimulus package.

House Speaker Nancy Pelosi has indicated she'd like to focus on strengthening the country's infrastructure, including digital infrastructure.