How Same-Sex Marriage Got Its Big Break In Hollywood 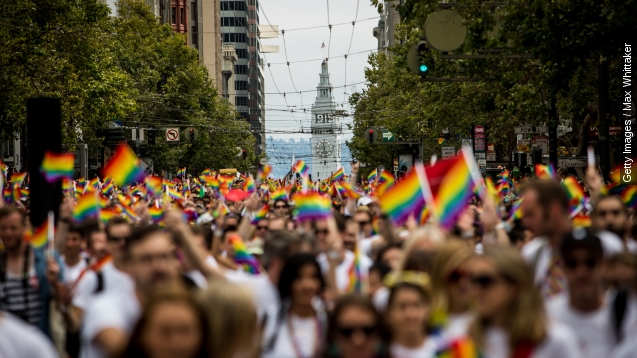 SMS
How Same-Sex Marriage Got Its Big Break In Hollywood
By Lexie Hammesfahr
By Lexie Hammesfahr
June 29, 2015
Leading up to the historic Supreme Court decision, Hollywood's film and TV shows have increased awareness about LGBTQ issues, including marriage.
SHOW TRANSCRIPT

On the road to the Supreme Court's same-sex marriage ruling, countless people have worked to gain wider acceptance of the LGBTQ community.

When the movie "The Birdcage," starring the late Robin Williams, was released in 1996, it was one of the first major films that helped take the movement mainstream.

What director Mike Nichols brought in the flamboyant sides of the characters, who are life-partners played by Williams and Nathan Lane, he balanced out with an underlying message: The couple was the film's main stable relationship.

The success of the film spoke for itself. It remains the No. 1 all-time top grossing movie with a gay theme.

When “Will and Grace” debuted two years later in 1998, it became the first primetime show to feature an openly gay male as the lead. In a series that saw an eight-season run, 83 Emmy nominations and 16 Emmy wins, the fact the two main characters were gay was not the central focus of the show.

Instead, the plotlines of the show were issues that everyone, regardless of sexuality or gender identity, could identify with romantic stumbles, career problems and fighting with loved ones.

Shows like “Will and Grace” helped pave the way for others, like ABC's “Modern Family,” to gain critical acclaim and widespread popularity.

Like the writers for "Will and Grace," the writers for “Modern Family” were also able to highlight the characters Cam and Mitch, as two fathers, two sons, a lawyer and a teacher — over their sexual orientation.

In an interview with Variety, Jesse Tyler Ferguson — who plays Mitch — said that one of the most impressive plotlines between his character and Cam happened during the sixth season. The two decided to get married, and Mitch’s father was not OK with it. (Video via ABC)

The success of “Modern Family” is apparent. Aside from the seven seasons, 244 award nominations and 97 wins, an exclusive Variety survey ranked the show as the No. 2 most influential show for the LGBTQ community.

That ranks it only second behind Ellen DeGeneres — because who doesn’t love her?

Ellen's had a huge influence on how society views the LGBTQ community.

When she publicly came out both as a character and real-life personality on her '90s show "Ellen," she used her comedy to ease the reactions of her critics.

Gay-rights activist and comedian Jessica Halem told NPR, "For her to say, 'I'm gay' and it's a laugh line, and you know it lets us laugh, it lets us release some of the anxiety."

And even further, coming out clearly didn't ruin her career.

So while strides to make the LGBTQ community more mainstream have been huge in television, the film industry has some catching up to do.

The 2015 GLAAD Studio Responsibility Index found that of the 114 films released by major studios in 2014, only 20 had characters identifying as LGBTQ. Of those 20, 10 were on screen for five minutes or less.