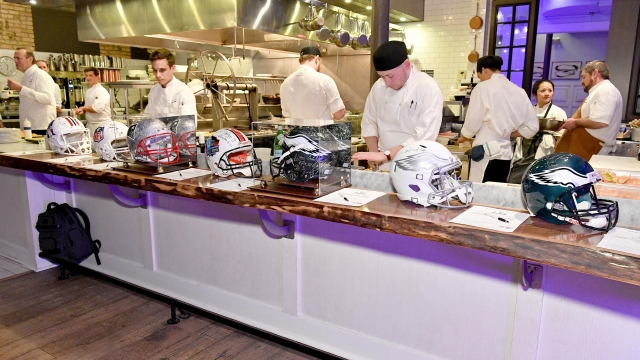 The big game means big appetites across the country.

The Super Bowl is the second-largest food consumption day in the U.S., aside from Thanksgiving.

That's why the U.S. Department of Agriculture is dishing out tips on safe food consumption for the more-than-100 million people watching the big game.

The agency estimates that around 48 million people get sick from foodborne illnesses each year, and the chances of getting food poisoning on Super Bowl Sunday are higher due to the large crowds and the length of the game.

Chicken wings are a popular food item, with people eating around 1 billion during the Super Bowl. So if you're cooking them at home, the USDA recommends not washing the meat beforehand, because bacteria can spread to other foods, utensils and surfaces. It's also important to make sure your wings are cooked to the right internal temperature, 165 degrees Fahrenheit, by using a food thermometer.

When you're ready to start serving, keep your hot foods hot and your cold food colds, even if that means switching plates back and forth to the oven or the refrigerator. Don't leave food out at room temperature for more than two hours.

If you're tempted to store dishes outside, even temporarily, the USDA says the sun can still quickly warm up foods in plastic containers.

The agency uses a measurement that it calls the "Danger Zone," where bacteria grows rapidly between 40 and 140 degrees Fahrenheit. In fact, a single bacterium can multiply to 17 million bacteria in just 12 hours.

So if you want to play it safe, you could just stick to non-perishable snacks like chips. According to Nielsen, Americans will spend around $227 million on potato chips alone during the Super Bowl.