How S.I. Landed The LeBron Scoop We Can't Stop Talking About 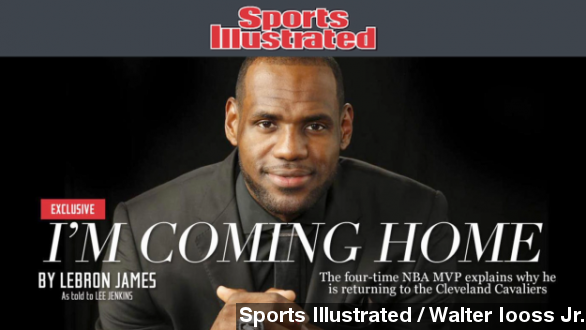 SMS
How S.I. Landed The LeBron Scoop We Can't Stop Talking About

By Christian Bryant
July 12, 2014
According to several sources, and Lee Jenkins himself, the LeBron scoop was made possible thanks to secrecy and Sports Illustrated's reputation.
SHOW TRANSCRIPT

LeBron James' "Decision 2.0" basically shattered the media — the two-time NBA champ left the Miami Heat to head back to his home state in pursuit of a long-awaited championshiop and a re-energized relationship with northeast Ohio. (Via Getty Images)

But perhaps equally as noteworthy as LeBron's homecoming was the scoop from Sports Illustrated's Lee Jenkins.

It was, as our own Kyle Luke put it, "airtight." Almost everyone in the news had little to no idea what was going to happen the day before.

"Coming up on Fox, still waiting." (Via WJW-TV)

"And Will, we're still waiting."

"We are still waiting." (Via WKYC)

"The King of the Court is taking his time, isn't he."

So how exactly did Jenkins get such a major scoop while other outlets were in the dark? Well, it started simply enough — with a pitch.

The Washington Post writes, "Jenkins, who has covered basketball for SI for four years, had proposed a story about the next phase of James's career ... Last Saturday, Jenkins e-mailed his editors and said that the story they'd discussed months earlier was a possibility."

According to Deadspin, Jenkins was careful, only referring to his story idea as that "thing" in his e-mail to Stone.

Jenkins was in Las Vegas on Wednesday, met with James Thursday and knew his decision that night. What's interesting is that Sports Illustrated's editors found out about James' decision the same day most of us did — only a few hours earlier. (Via WEWS, Expedia)

Both Jenkins and Stone said the idea to tell James' story as a first-person essay came from the King's camp. But it was S.I.'s previous reporting that led to that suggestion.

Jenkins: "It was a unique and probably unorthodox situation, but not that different maybe from the Jason Collins situation or Jabari Parker that we had also." (Via Sports Illustrated)

Jenkins is referring to the Jason Collins first-person essay — in which the NBA veteran announced he is gay — and the sit-down interview with Jabari Parker when he announced he was leaving Duke and entering the 2014 NBA Draft. (Via Sports Illustrated)

In the aftermath of the Lebron's decision Friday, Stone told reporters James ultimately trusted Sports Illustrated to not make a "circus" out of things — much like how his announcement in 2010 turned out. (Via ESPN)

A writer at The New York Times criticizes Jenkins for using the first-person formula to tell James' story, writing, "The magazine should have pressed for a story that carried more journalistic heft." But that same writer also offers praise for the end result saying, in part, "The impact of James’s words about going back to Cleveland, and of getting them out first, will probably outlast the manner in which they were rendered."