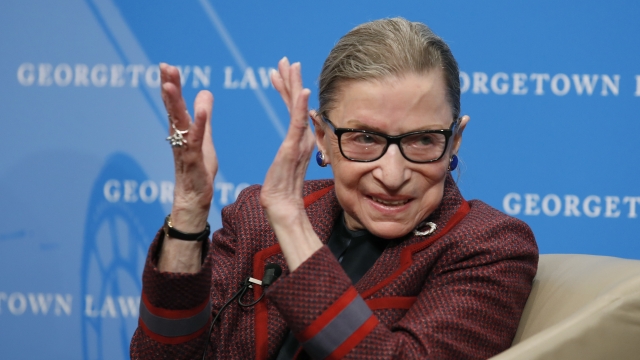 Kimberly Robinson: "Well, many people may be surprised that when she first joined the court in 1993 she was considered a consensus pick. She was somebody that President Clinton thought would really be able to bridge the gap between those on the left and the right on the court. She since has become known as a "great dissenter" and really the lead of the court's liberal wing. But another interesting fact about Justice Ginsburg is that she's one of the few justices who would have been noteworthy even if she had never been appointed to the bench. And that's of course, due to her work with the ACLU where in that role, she brought a number of cases to the court that really laid the groundwork for women's rights and gender equality as we know it today."

Packard: "You know we're entering into an election season, Kimberly, that has already litigious. There is talk of a Supreme Court fight down the road, especially given how long it's going to take to get complete results this time around. If that happens and this goes to a Supreme Court where there are eight justices, could that present a challenge?"

Robinson: "Yes, it could be devastating. And actually, we hear we heard Sen. Ted Cruz say this is a reason why the court needs to why the Senate needs to fill that role because there could be a contentious election case that comes to the justices. Of course, that was the exact opposite position that Republicans took. Um, but everybody, right now is on the other side of the wall that they were on in 2016."

Packard: "Based on what we know about the people the president wants to put forward if the Republicans succeed in getting a confirmation, what's the ideological makeup of the highest court gonna look like in the years ahead, Kimberly?"

Robinson: "Well, just a few years ago, it seemed like we might have the first, um majority Democratic led the Supreme Court. That has drastically shifted. Now we have five justices who reported who were appointed by Republican presidents and just three by Democrats. If they get another one, this is not going to be a moderate court. As we have seen it over the last few years. It's going to keep getting more and more conservative, and we may see the same players in the middle. Chief Justice Roberts and perhaps Justice Kavanaugh and Gorsuch, but that middle is gonna be very much more to the right than it is today, and than it has been in the past."

Packard: "Should this seat remain open, Joe Biden win the presidency Republicans retain the Senate — I mean, that's a lot of if this happened, if this happened right — but in that scenario, it would still be a fight, albeit a much different one. Would Mitch McConnell, in that scenario, have no choice but to move forward with a nomination from Joe Biden? Or are there tricks up his sleeve to make that more difficult for a potential Biden White House?"

Robinson: "I think one thing we can say for sure about Mitch McConnell is that he isn't forced to do anything, and so we're going to see him do the best that he can to fill that seat while there's still time. And if the scenario plays out as you have unfolded it, I'm not sure that we see a nominee on the court anytime soon. Something will really have to give in what is right now just a bare knuckles political game."

Packard: "Kimberly Robinson with Bloomberg Law, it's good to have your perspective on a day like today, on a day when, obviously, there are a lot of implications to what we're watching. And I appreciate your insight on this. Kimberly, Thanks very much."