How Russia's False Flags Helped Launch A War In Ukraine 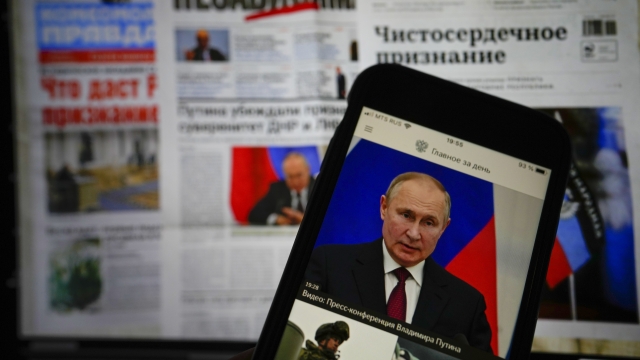 SMS
How Russia's False Flags Helped Launch A War In Ukraine
By Jake Godin
By Jake Godin
February 24, 2022
Russia has released a multitude of videos and reports that have been doctored, adding to the fire of disinformation coming from the situation.

As Russia continues its invasion of Ukraine by land and by air, its President Vladimir Putin's official state news agencies and online allies have been waging their own campaign of information warfare.

Their videos have racked up countless views online, but upon closer review and using the open-source resources available to Newsy and our partners at the investigative collective Bellingcat, many of these videos can be debunked and proven to be hoaxes, revealing manufactured propaganda meant to vilify or demoralize Ukraine's government and military as they face attack from Russia.

One of the first and most prominent of the suspect videos to pop up during the rising tension between Ukraine and Russia was one which allegedly shows members of the Ukrainian breakaway region known as the Donetsk People's Republic confronting Polish-speaking Ukrainian saboteurs whose goal was to blow up a chlorine tank in separatist-held territory.

The incident was reported out by Russia's state-run TASS news agency and shared in pro-Russian circles on social media as matter-of-fact, claiming that the footage was retrieved from the body of a dead soldier. The implication is that Ukraine is the violent aggressor against Russia, but there are a few problems with the video.

Specifically, the exif metadata, which is essentially standard under-the-hood data stored in most images and videos, shows that the video was created Feb. 8, 10 days before it was released.

The explosion sounds in the video are also suspect. This too has a clue hidden inside the original video's metadata where there's a filename for another video labeled "M72A5 LAW and AIPLAS live fire."

A quick search on YouTube reveals the same video, which shows a Finnish Defence Forces live fire exercise recorded more than 10 years ago. It turns out an explosion in that video very closely matches one of the explosions in the saboteur video.

Russia's government has claimed Ukrainian aggression in a few other reports, including a supposed helmet cam footage showing an attack on Russia's Rostov Oblast, which borders eastern Ukraine.

Russia claimed it killed five Ukrainian "saboteurs" as well as destroyed two Ukrainian armored vehicles. Russian reporters ended up going to the scene after the fact and another video showed Russian soldiers approaching and examining the destroyed vehicles.

The only problem here is that the incident took place at the border where separatist-controlled territory meets Russia's territory. That'd mean Ukraine's military would have had to traverse around 25 miles of enemy territory before reaching Russia's border.

The fires caused from the incident even appeared on NASA's "Fire Information for Resource Management System" which uses satellites to track fires across the globe.

There's also another issue: the vehicles used in the so-called incursion were BTR-70Ms — a type of armored personnel carrier that's not even in use by Ukraine's forces.

Incidentally, the location of this video is the same place where Russia also claimed one of its border posts was destroyed by Ukrainian shelling.

In a further case from Feb. 20, a pro-Russian militia from Luhansk posted a video to its Telegram channel claiming to show a man in the village of Pryshyb whose leg had to be amputated after shelling by Ukrainian forces.

The video includes an initial clip of a man on the ground allegedly at the scene of his injury. However, it's easily disprovable because the man's prosthesis is clearly visible in the initial clip — hence his leg had already been amputated.

A later clip posted on some Telegram channels appeared to blur the prosthesis in the initial clip.

These weren't the only attempts from Russian state media to set up Ukraine as the aggressor in this war. One lingering question is what sort of impact Russia's information war has, both internationally and for its own population.

Alexander Clarkson, who teaches European Studies at King's College London, says it's possible we're past the point where the false flag kind of misinformation that led up to this conflict has any traction with the Russian population. Russia and its proxies may not even care that these videos shared by state media are sloppy and easily disproven.

"My impression is one potential narrative line was these war crimes tribunals or investigations or abuses, existence of genocide, and none of this is getting any traction because I think we're well past the point where you're going to generate a lot of enthusiasm in Russia," Clarkson said. "But that's past the point anyway, because the system is now so centralized towards Putin that the opinion of the public is now largely peripheral as to whether a war decision is going to be made or sustained. But by using these war crimes allegations and mirror imaging the language of European institutions and national institutions... you try to undermine the legitimacy by simply saying... 'This is obviously fake what we're doing, but so is you, and this whole system is a lie.'"

Just hours into Russia's invasion into Ukraine, Moscow's state media watchdog demanded that Russian media only cite official sources on developments in the war in Ukraine – the same sources which report these debunked cases at face value.

That means fact-checks of Russian messaging might not reach ordinary Russian viewers according to Anton Barbashin, the editorial director of Riddle, an online journal focused on Russian politics and society.

"First of all, the vast majority of Russians do not know what debunking is, so they only watch what is being shown to their state channels," Barbashin said. "And the problem is, now that the the general attitude in society is anti war, it's about... domestic concerns. I mean, it's not 2014. Now is much different, and you see a lot of figures, figures who are popular among the majority of Russians who perform with the state-controlled channels and everything, speaking up against war. They don't necessarily see that look, Putin started a war against Ukraine. They're just saying, you know, we are against war. This is bad, of course, for Kremlin propaganda because they are not framing this war. They're framing this as a limited operation with the goal of protecting general Inala and defeating Nazism. And, you know, considering the development of Russian law with regards to protests, all of them, every single one of people protesting today are facing legal charges against them. So I mean, they're all brave."

These are only a few drops of the flood of disinformation that has come out so far. Newsy's partners at Bellingcat have put together a public spreadsheet documenting the reported incidents leading up to the conflict, and both of us are keeping track of any civilian casualties coming out of the war.

Knowing what events are real and which ones are more likely disinformation is important for understanding just how the situation continues to unfold across Ukraine and how the Kremlin will continue to justify its illegal invasion of its neighbor.