How Robots Could Help Contain Ebola 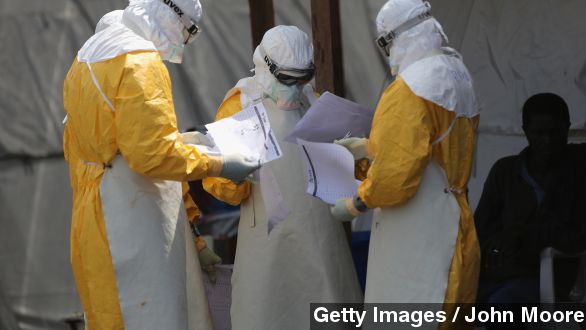 SMS
How Robots Could Help Contain Ebola
By Madison Burke
By Madison Burke
November 8, 2014
Scientists are brainstorming ways to use robots to cut back on the risk Ebola healthcare workers face.
SHOW TRANSCRIPT

Healthcare and sanitation workers in West Africa put themselves at risk every day to fight Ebola, but wouldn't it be great if robots could lessen at least some of that risk?

That question was asked Friday by three top robotics universities along with U.S. government officials at brainstorming meetings all over the country.

Ebola is spread by contact with the blood or bodily fluids of someone who is sick or has died from the disease. So, robots are obviously an attractive option.

In fact, there are already sanitation robots in place in some West African hospitals that use UV light to destroy the virus. But this national brainstorm is hoping to take robot use a step farther.

One of the universities involved, the Worcester Polytechnic Institute or WPI says some of its existing robots can be repurposed to help caseworkers remove contaminated clothing and clean up contaminated areas.

The universities have considered using telepresence for doctors to treat their patients without actually having to be in the room with them. Some robots are even able to translate what the doctors are saying into the patient's language.

KEN GOLDBERG VIA CNET: "The great thing about putting a robot in there is that you can then keep people out of harms way."

For a while there has been talk about robots being used to bury the dead, but this raises some concerns.

The BBC pointed out we don't know how local communities would feel about robots transporting and burying their dead or if it would even be accepted at all.

WPI says it hopes to have some of its robots working in West Africa within three months.