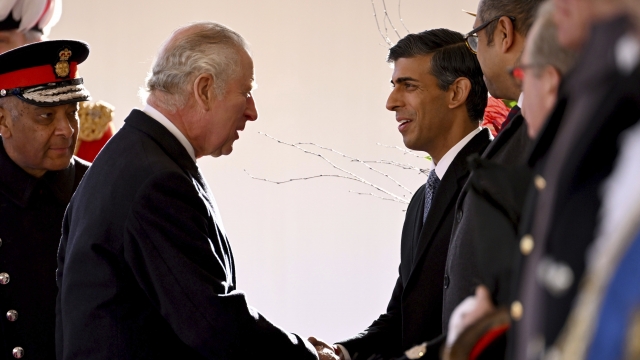 SMS
How Rishi Sunak's Plan For U.K. Could Affect US Economy, Politics
By Newsy Staff
By Newsy Staff
November 22, 2022
Any potential hits to the U.K. economy can complicate matters for the U.S., making its new prime minister's plan globally important.

Political drama has been unfolding in Britain after the parliamentary democracy said so long to Liz Truss — its shortest serving prime minister in history, serving just under seven weeks.

Her final days were marked by economic policies that sent ripples across European markets, ultimately leading Truss to resign and be replaced by current Prime Minister Rishi Sunak.

European markets have since calmed a bit, but it's left the economy and its people feeling like they're on shaky ground — wondering how Britain got there, what's next for the U.K. and how this could impact relations with the U.S.

The reasoning behind those concerns can partly be traced back to Britain's exit from the European Union, or Brexit, in January 2020. The U.K. legally revoked its membership from the 28-nation bloc in a move backed by 52% of British voters in 2016. But the vitriol and turmoil that led to Brexit exposed British anxieties about globalization and raised serious concerns about the consequences for a united Europe.

Experts say leaving the EU is the largest change in the U.K.'s relationship with the rest of the world in nearly half a century. It wasn't a separation many Brits saw coming.

Economist Sophie Hale, principal economist at Resolution Foundation and the coauthor of a recent report exploring Brexit's impact on the European economy, explained to Newsy.

"Most of the political establishment at the time was supporting the Remain position, including both the Labor and Conservative governments at the time, so I think at the time it was seen as unlikely," Hale said. "But clearly, at least 50% of the population thought that it was the right decision."

Many polls show the people of Britain are changing their mind. A growing number believe leaving the EU was a mistake, and Brexit's economic impact is a big reason why.

Britain was already suffering from years of lower productivity and near-stagnant income growth. Brexit then battered its economy further.

"We saw some immediate economic impacts, and the pound depreciated," Hale said. "As a result, we saw some kind of price rises, some imported inflation, and since then, we've also seen business investment stalling largely because of the kind of uncertainty that it created around the future relationship between the United Kingdom and the EU."

Much of this happened under former Prime Minister Boris Johnson. He strongly supported the "Leave" position under Brexit. Couple that choice with two years of pandemic stressors, then a war in Ukraine hurting gas and energy supply — the economy was strained.

Johnson resigned right after it was revealed he violated his own administration's social distancing rules during the early pandemic. Truss narrowly won the margin to replace him in September.

But her budget plans sent the pound to its lowest level against the U.S. dollar, forcing the Bank of England to intervene.

In late September, the pound dipped as low as 1.03 per U.S. dollar — the lowest in nearly two decades.

A weak pound was, of course, good news for American travelers, giving them more purchasing power abroad. But longterm, chaos in European markets can hurt America's economy too, and it throws off the trade balance between the two powerful western nations.

While a weaker pound makes imports into the U.S. cheaper, American companies exporting to Europe face tougher competition, and If U.S. exports weaken as a result, that weakens the U.S. economy. 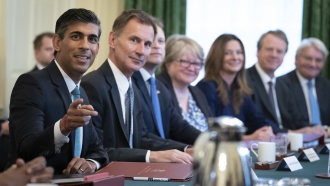 The big picture: a recession in Europe could also lead to a global one. The World Bank has already warned of this. As part of having his new job, Prime Minister Sunak is tasked with avoiding that.

Sunak unveiled a new budget last week which calls for billions of dollars of spending cuts and some pretty steep tax increases. These are supposed to stabilize the economy and avoid a recession.

To cushion the blow, Sunak's administration also announced a 10% increase in the state pension, benefits and tax credits to adjust for September's inflation figure. The government said it will also increase the National Living Wage to 10.42 pounds an hour for adults above 23 years old, but Hale said the outlook for living standards in the U.K. was still "pretty dire."

"I guess the overarching policy is to sort of spend a bit of money today to support households through this kind of very tough winter in the kind of coming year with the government announcing what will become the sort of extension to the energy price guarantees," Hale said. "That's the kind of support that households are receiving to help them with higher energy prices and energy bills being announced, and these these policies will kind of help support households. But then looking ahead, we're seeing a number of a kind of tax rises that are going to increase the cost to households, particularly working age households, as well as eventual kind of cuts to government spending, and that will hit the economy in other ways."

As for this effect on the U.S.: President Joe Biden and Sunak met for the first time last week in Indonesia, where they both reaffirmed the importance of a U.S.-U.K. partnership. But how the two countries negotiate going forward could change depending on evolving priorities, power dynamics and personalities in charge.