How Relationships Have Changed Since Dating Apps Became The Norm 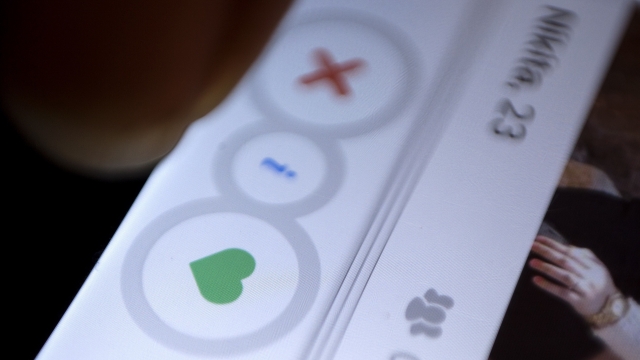 In this segment of "Love Life," Newsy's "In The Loop" explores how dating apps have changed the way singles are finding relationships.

Dating apps are common in this age. According to Pew Research Center's latest data on online dating, 30% of U.S. adults say they have used a dating app. That number is up from just 11% in 2013.

Therapist Matt Lundquist, who works with couples, says in recent years, dating apps often come up in his sessions.

"Many couples we've seen who met through a dating app of some kind has trended up pretty steadily and continually," Lundquist said. "It accelerated yet again in the pandemic, so it's become a big part of people's relationships and people's dating lives. It's become kind of the presumptive way that people are connecting and meeting people to date."

But before dating apps, there were dating sites.

More people were gaining access to computers in the 80s and 90s. The 1998 rom com "You've Got Mail" was one of the first pop culture introductions to online dating.

That time period is also when the world's first online dating website was launched, Match.com.

In the early 2000s, other dating sites like eHarmony came onto the scene. These dating sites required a detailed profile where users had to give a good bit of information about their life and interests.

Dating apps came almost a decade later, originating in the gay community with platforms like Grindr that launched in 2009. The goal was to connect single men within the same geographic area. In 2012, Tinder was launched, which has been called a pivotal moment for online dating.

But these apps are seen as more casual, without detailed profiles like the dating sites that came before them. They became associated with "hooking up" or just casual encounters, rather than steady dating. Although there's limited research on dating apps since they're still fairly new, experts say this is because users can quickly glance at someone's physical appearance and see if there's an attraction before moving on to the next person.

Matchmaking Is Making A Resurgence In The Dating World

In this segment of "Love Life," Newsy's "In The Loop" explores the resurgence of matchmaking to find love in today's culture.

Hinge was released in 2013, then Bumble came out in 2014 when a former Tinder executive decided to branch out and create a new type of platform where women can make the first move.

Dating apps have expanded the pool of people you can meet, and users say they're likely to meet people on the apps they wouldn't have met otherwise. But Lundquist says because of all of this choice, dating apps can also be tiring. Plus, attitudes toward dating have shifted.

"There are a lot of people... who are kind of cynically swiping, and almost the expectation when they open their phone and look at 10 or 20 or 50 people, which is not an uncommon number to swipe through in a sitting," Lundquist said. "When they agree to go on a date with somebody, the energy around that is really cynical, like, 'Oh, I have a date with somebody from Bumble. It's probably going to be awful.' There's just a lot of cynicism about it."

A survey from April of 500 18 to 54-year-olds found that about 80% experienced emotional burnout or fatigue with online dating.

With that said, some people have great luck with these apps, and their relationships end in marriage. Pew says 12% of people have married or been in a committed relationship with someone they met on a dating app.

According to The Knot, last year, Tinder was responsible for pairing over a quarter of newlyweds who met online, which may be surprising as many people know this as the app for more casual relationships.

When online dating was newer, it was taboo. There was a stigma around meeting someone online, but as they have become the norm, experts say people are more honest about sharing where they met.