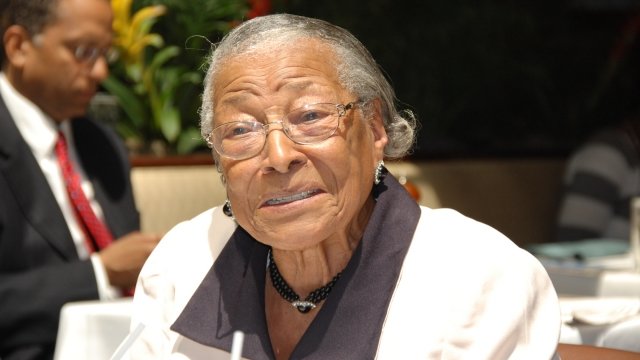 During her nearly 10-minute speech at the 75th Golden Globe Awards, Oprah Winfrey highlighted the story of a woman who, she said, lived "too many years in a culture broken by brutally powerful men."

Recy Taylor was a 24-year-old sharecropper from Alabama who was kidnapped and raped by six white men on her way home from church in 1944.

Speaking to NPR's Michel Martin in 2011, Taylor had this to say about her attack: "They blindfolded me. After they messed over and did what they were going to do me, say, we're going to take you back. We're going to put you out. But if you tell it, we're going to kill you."

The call to action page for sexual assault prevention was removed soon after the inauguration, but many critics noticed it only recently.

At the time of the attack, she was married with a three-year-old daughter.

Despite a confession from one of the men involved in the attack, two grand juries declined to indict the men.

Taylor's story helped rally activists across the nation, including Rosa Parks. After Taylor's attack, the NAACP sent Parks, an investigator, to look into the case. The same year as Taylor's attack, Parks helped organize the Committee for Equal Justice for Mrs. Recy Taylor, a group that would go on to organize the Montgomery Bus Boycott.

Taylor's story is detailed in the documentary "The Rape of Recy Taylor."

"What happened to Recy Taylor didn't just happen to her. It happened to lots of women," said Nancy Buirski, the documentary's writer and director.

In 2011, Alabama lawmakers passed a resolution apologizing to Taylor for the state's involvement in failing to prosecute Taylor's attackers.