How Rare Is A Presidential Trip To A US Mosque? 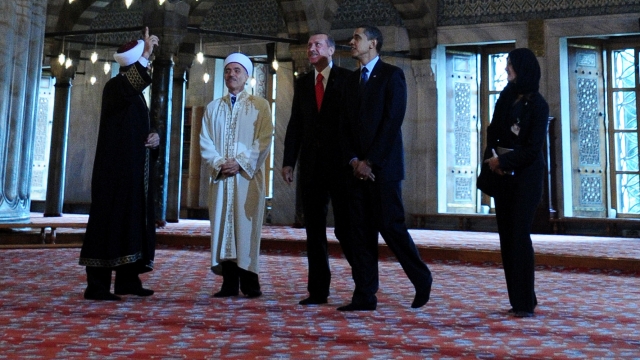 On Wednesday, President Barack Obama will step foot in the Islamic Society of Baltimore.

It will be the first time he's visited a U.S. mosque during his presidency, although he's been to several overseas.

There haven't been many other presidents who have visited U.S. mosques while in office.

The first mosque in the U.S. was constructed in 1929 near Ross, North Dakota.

But the earliest president to visit a U.S. mosque while in office was Dwight D. Eisenhower when he dedicated the Islamic Center of Washington in D.C. in 1957.

Shortly after 9/11, George W. Bush went to that same mosque and gave the iconic "Islam is peace" speech. (Video via C-SPAN)

Several other presidents have given speeches at performance halls called mosques. But those were Arabic-style buildings not connected to the Islamic faith.

Muslim leaders have encouraged Obama to visit a U.S. mosque in the past. He's advocated for tolerance and acceptance toward Muslims throughout his terms.

This video includes images from Getty Images and Library of Congress.