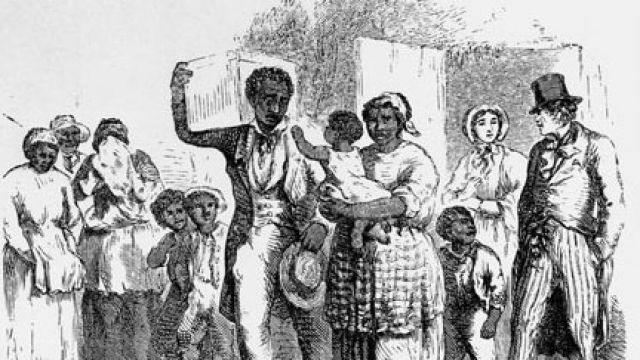 By Casey Mendoza
February 18, 2019
Black history education is a fairly new concept in U.S. schools. In order to understand its development, let's start from the beginning.
SHOW TRANSCRIPT

Black history education as we know it, as riddled as it is with errors and mischaracterizations, took centuries to make it into mainstream classrooms. Before that, the teaching of the topic was largely based on racist, Eurocentric narratives. To better understand how it all changed, let's start from the beginning — with some of the earliest American history textbooks, published in the 1800s.

This is a history textbook from 1832. It was written by Noah Webster — yes, that Webster— and one of the opening chapters describes the QUOTE "varieties of the human race" in undeniably racist detail. To be more specific, the text literally describes groups of people like Hindus as "ugly," "cowardly and effeminate," but refers to Europeans as "the most distinguished variety of men."

One Harvard researcher described Webster's text as "distressingly typical" of the time. Because it was written three decades before the end of the Civil War, the book only described slavery in the context of policy and completely ignored the abolitionist movement. That decision wasn’t just an oversight. Webster really believed that Africans had "no history" and —  you can see this from his writings — that history was centered on European colonizers and politicians.

"It was just part of kind of the racial climate during that time, right? Education, particularly history, was used as a racial apparatus to continue to transmit notions of race, racial hierarchy and different aspects that told black people were like non human are subhuman, right? So history was used as a tool for those particular aspects."

These white supremacist narratives continued for decades, even after the Civil War.

"So, for example, a book author by [the name of] Sherman Williams in 1898 referenced this religious aspect, y'know, teaching kids — this was a textbook — and there he said, 'First God created the black man, realized he did poorly and started making man more lighter and lighter until he got it right.  So, for the black man, he gave them a box of tools for the white man, he gave him pen and paper, so the black man can work for the white man for the rest of his life.' So those were kind of the type of narratives that were in early traditional mainstream textbooks for children to learn."

In 1915, historian Carter G. Woodson formed the Association for the Study of Negro Life to promote and preserve black history and culture. The group laid the foundation for black history curricula by writing textbooks, publishing the work of black academics and designing courses for teachers. Some of its lasting contributions to society include black history academic journals, and "Negro History Week" — the precursor to Black History Month. In 2018, Google celebrated Woodson as the "Father of Black History." And he's the namesake for the University of Missouri's Carter Center for K-12 Black History Education — which has its work cut out for itself.

"During my time, you know, I'm 40 years old. And during that 40 year old phase, you still had textbooks that taught that black people were happy slaves. It didn't really give agency to blackness, right? So, you know, those historical narratives are tough to kind of dismiss, or tough to recenter in our minds, because they're ingrained in our psyche. And, you know, when we add the media, you know, in terms of like movies, in terms of other social media sites that perpetrate those same particular narratives, it's real hard to kind of approaching and move past kind of what we learned about history textbooks."

Today, even though we've gotten rid of the obviously racist texts of Webster and Williams, black history education is still taught from a white, Eurocentric lens. Because of that, scholars like Professor King are working in Woodson's footsteps — tackling the miseducation of black history one textbook at a time.