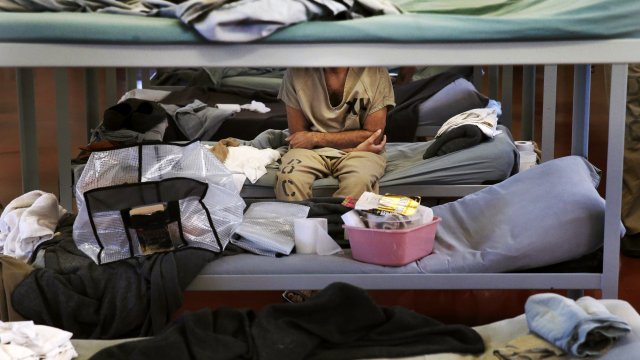 SMS
How One Of The Country's Largest Jails Is Prepping For The Coronavirus
By Jamal Andress
By Jamal Andress
March 13, 2020
There are 2.3 million people in U.S. prisons and jails, and experts say this population is especially vulnerable to the coronavirus pandemic.
SHOW TRANSCRIPT

Sheriff Tom Dart runs the Cook County Jail in Chicago, one of the country's largest.

DART: "The scenario that keeps me up at night is that if two weeks, one month, two months from now, it becomes clear, this is so widespread, and if there was something that I should have thought of that I didn't think of. That's what keeps me up."

For now, there aren't any confirmed cases of the coronavirus in Dart's facility. But he says he's been taking precautions against the virus since January, questioning new inmates, taking their temperature, and then if necessary, testing them for the illness.

DART: "As this has expanded now, and the likelihood of it expanding further has grown, I'm adding another couple dozen layers to this thing, and boy is it tricky."

Those layers include separating new inmates from the rest of the jail population for a full week, discouraging outside visitors for the time being, thoroughly examining those who do choose to visit, and working with the court system to enable remote court appearances and hurry along nonviolent cases.

Dart is one of many in the U.S. criminal justice system calling for the release of some nonviolent offenders in reaction to the spread of the coronavirus.

There are nearly 2.3 million people in the American criminal justice system. Experts say this population is particularly vulnerable to this virus due to close quarters and tightly housed populations in prisons and jails.

DART: "I don't think anybody is ready for this. And as far as the other jails and prisons, I honestly have not, in any way, scanned what they're doing. But having scanned in an effort to try to find if there's something innovative, something different, something really beyond just the standard, I haven't seen that anywhere."

The Cook County Jail's average daily population has dropped significantly since Dart took over the facility — from more than 10,000 people a decade ago to a little over 5,700 today.

DART: "If this had occurred six years ago, five, certainly six, I wouldn't have any arrows in my quiver. I mean, I'd be, you know, nothing. But I have right now, four empty divisions, maybe five, five empty divisions. So I have space that gives me latitude to deal with something like this."

As for preparations for an outbreak inside the jail, Dart says he has 1,700 empty beds he can use to quarantine a segment of the population.

He said he worries about what could happen if the local court system shuts down, leaving inmates who are awaiting trial stuck behind bars.

DART: "The reality of it is if they stop, there's still crime that is going to be going on in the county. There's still going to be arrests being made, and the number of people coming, it'll just pile up, and there won't be any cases being resolved. So if they're thinking of altering, you know, their process, which I don't argue with because that's what we all are doing right now, there has to be a mechanism where the disposition of cases will continue."

For now, there aren't any major coronavirus outbreaks among the U.S. jail and prison population.