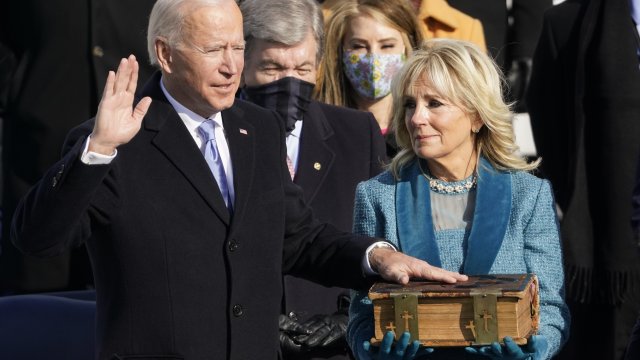 The high point of every presidential inauguration, starts with a simple instruction.

"Place your left hand on the bible and repeat after me"

From Ronald Reagan, and those before him, Most presidents have used sacred texts for this hallowed moment in American history. But not everyone takes this route.

"John Quincy Adams felt he was taking an oath of office to the Constitution," said Claire Jerry, political history curator at the National Museum of American History. "So he placed his hand on a book of law that had the Constitution in it. Then sometimes people are sworn in to be president after a tragic event, a death and assassination. And so some of those are less formal. Theodore Roosevelt in when there was no Bible present because he was being sworn in after the death of William McKinley "

The Constitution mandates presidents be sworn in.But it doesn't say anything about using a Bible, so where did this tradition come from?

But the choice of Bible – or whatever book a president may choose – is a chance to personalize the swearing-in ceremony. Many – like George W. Bush and Jimmy Carter – used a family Bible. Others try to draw on the strength of historical figures. George H. W. Bush used George Washington's Bible, while Presidents Trump and Obama chose one belonging to Abraham Lincoln.

"It's become part of the expected ceremony of Inauguration Day," said Matthew Wilson, associate professor at Southern Methodist University. "While George Washington's selection of the Bible was somewhat impromptu in last minute, over time, this has become a much more deliberate, premeditated part of the ceremony where presidents have wanted to convey a particular message based on the Bible that they choose or the page to which they happen to have an open."

For instance, Wilson says President Biden's selection carries weight -- literally and figuratively. The Biden family Bible – seen here when then-Vice President Biden was sworn in– is 5 inches thick and dates back to the 19th century.

"Well, I think the use of a family heirloom as opposed to an historical artifact does kind of drive home the point that faith for Joe Biden is organic, it's authentic," Wilson said. "It's something that's part of his personal and his family heritage, as opposed to something that he is simply putting on in public life."

There are unprecedented circumstances surrounding this inauguration. Much of the pageantry is lost this year. However the swearing-in ceremony will endure, and it's chance to bring renewed focus on this tradition.

"It's really important when you think about people taking an oath to think about promises we all make, whether it's at a wedding or something like that, that we have witnesses to attest to the validity of what's happened," Jerry said. "And we as Americans are part of that covenant that when the president takes that oath, we are participating in this covenant to move the country forward."