How Police Can Use Civil Asset Forfeiture To Get Your Cash 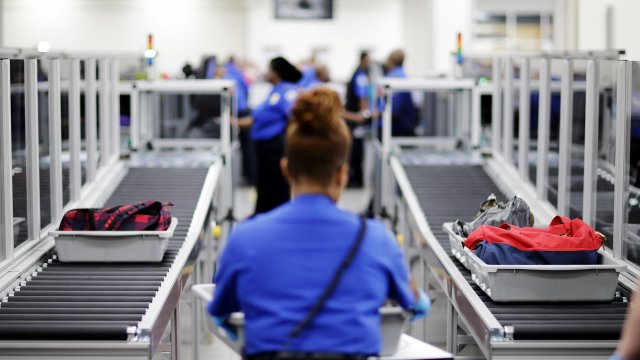 SMS
How Police Can Use Civil Asset Forfeiture To Get Your Cash
By Newsy Staff
By Newsy Staff
December 16, 2021
A photo of a police dog at an airport is driving conversation on civil asset forfeiture, a controversial series of laws that allows property seizure.

A picture going around on the internet shows a police dog next to $100,000 in cash that was seized at Dallas airport. It made some noise online because the photo featuring a questionably "good boy" is actually just another example of a controversial process known as civil asset forfeiture.

It's a series of laws that lets law enforcement seize property suspected of being involved in illegal activity, without a warrant and without charging anyone of a crime.

In this case, the Dallas Police claimed the seizure was OK because it's illegal to travel with over $10,000 in cash domestically. But we want to clarify that's actually only true for international flights — not domestic. And, as is the norm with cases like this, the owner of the cash hasn't been charged with a crime.

This case is far from the only one of its kind, but the online attention got a lot of people asking: Can police really just take money like that, without a warrant? Let's break this down.

According to the DOJ, asset forfeiture requires only some sort of

"probable cause" to seize anything — from wads of cash, to cars, to even cryptocurrency. And law enforcement can sometimes ask the U.S. attorney's office for "a letter" that protects agencies from any future liability.

Seizures often happen at travel points and are often justified by authorities as a case of "suspected drug trafficking."

But it can happen seemingly at random.

"When I went to pick my car up, soon as I put my hands on the handle, about five to six police officers just came from out of nowhere, one even had his hand on his holster, and they told me they were going to seize my car because it was suspected of being in criminal activity," said Malinda Harris, a victim of civil asset forfeiture. "Whether I give it to them or not, the car was coming with them."

And it can happen to anyone, even a congressman.

"They wanted me to voluntarily forfeit $320,000 even though they admitted in writing that all the money was legally earned and properly reported — in writing," Rep. Andrew Clyde, a Republican from Georgia, said. "This was nothing short of extortion, and I refused. They then threatened me with criminal prosecution to get a civil monetary settlement ... Long story short, I fought the Internal Revenue Service in court, and eventually had my money returned, but it cost me $150,000. Unfortunately, too many Americans do not have the ability or the resource to take on the government."

And he's right. The data suggests the estimated costs of going to court is usually more than the value of lost property, so for most, it's just not worth challenging.

Harris got her car back five years after it was seized – and that’s only because a Libertarian think tank offered to represent her for free.

All these seizures are going straight to law enforcement.

One long-term investigation looked into seizures in St. Louis as an example: The St. Louis County Police Department used $170,000 in asset forfeiture money to buy a BEAR (ballistic engineered armored response) tactical vehicle in 2001. It was later in use during the Ferguson protests.

The Missouri Highway Patrol spent more than $2 million in forfeited funds on vehicles between 2010 and 2014.

This aligns with data from the Institute of Justice, which suggested law enforcement focuses on seizing cash, and property that's easy to convert to cash, like cars.

This is also why some reform-focused groups like the ACLU have suggested removing that incentive to bring these cases down: Redirect where the seized money goes, remove some of those barriers to challenge seizures, and require a warrant or conviction for taking property.

Former Attorney General Eric Holder actually tried to make that mandatory in 2015 for federal property seizures, though those reforms were rolled back by Sessions.

But as stories like that case in Dallas get more attention, momentum could build for reform again. Especially since this is one of the few areas for change that groups across the political spectrum — from progressive organizations to the Libertarian think tanks — can all get behind.