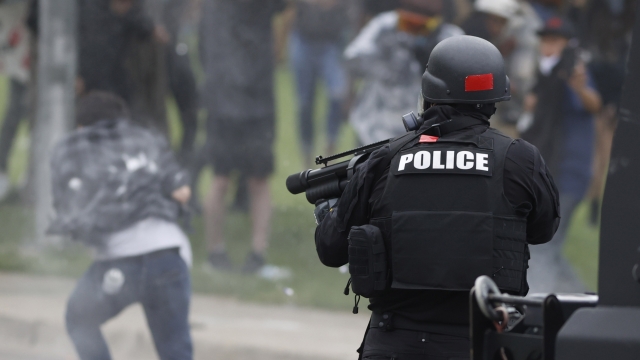 SMS
How Police Brutality Is Tied To America's Gun Culture
By Shira Tarlo
By Shira Tarlo
June 29, 2020
Researchers say discussing the role of guns in America is crucial to conversations about police brutality and racial inequality.
SHOW TRANSCRIPT

That's the rallying cry heard from many of the protesters demanding justice for George Floyd and the hundreds of Black Americans who have died in police custody.

It has inspired a nationwide debate about systemic racism and police brutality. But largely absent from the ongoing discussion is the role of guns.

"When the bottom line is, 'We want fewer civilians killed by law enforcement.' In order to achieve that goal, we should be addressing guns," said Daniel Webster, director of the Johns Hopkins Center for Gun Policy and Research.

Floyd's death did not involve a firearm, but most fatal police encounters do.

Data suggests about 1,000 civilians are fatally shot by police each year, and Black Americans are disproportionately affected.

The FBI does not mandate local and state law enforcement to report data on police killings, making it difficult for researchers to understand the true scale of the problem in the U.S. and how the U.S. compares to its peers.

Some experts argue that to understand the phenomenon, it's key to start thinking of police killings as inherently tied to gun ownership in the U.S.

"So much of their policies are driven around an assumption that so many encounters could turn lethal toward the officer in a second. And that has, in my opinion, almost everything to do with the ubiquity of firearms in the United States," said Webster.

Roughly four in 10 homes have a gun in them, and every state allows the carrying of concealed weapons in some form. Another way of looking at it: Americans make up 4% of the world's population but about 40% of the world's guns.

What this all means is that guns present a constant potential threat to American police — and that an encounter between a civilian and a police officer can turn deadly in a second.

"In a population of over 300 million people, you’re going to expect there's going to be some of this inappropriate use of force and deadly encounters, but the question is how much of this stuff is going on and is the problem going up or down? Don’t have good data to answer that, so we just look at examples of other major problems that the U.S. has faced — data and science is a way forward to get at that," said Bruce Taylor, a senior fellow at NORC at the University of Chicago who is investigating police officer-involved shootings in the U.S.

Stronger gun laws are also crucial to reform, they say.

"The two different things that i think we need to be thinking of is sit down and redesign public safety systems to respond to the needs in the community," said Webster. "We need to have community voice in that process. We need to have accountability and then back to what we were talking about earlier. To achieve our public safety needs, we need stronger gun laws."