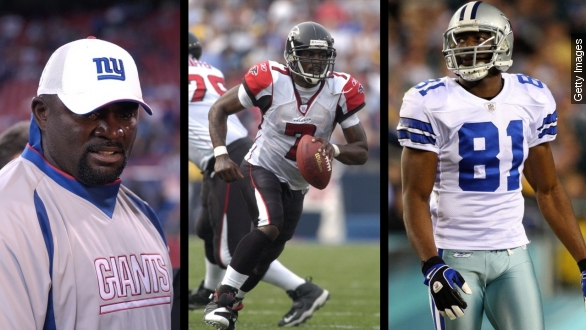 SMS
How Often Do Ex-NFL Players Go Bankrupt?
By Matt Moreno
By Matt Moreno
April 15, 2015
A new study found that NFL greats like Lawrence Taylor, Michael Vick and Terrell Owens aren't the only ones filing for bankruptcy.
SHOW TRANSCRIPT

In the NFL, 11 players on a team take the field every down. Although many of them make millions of dollars a year, a new study says nearly two of those 11 players have gone bankrupt about a decade after they've retired.

Those numbers are from a new, working paper released by the National Bureau of Economic Research. It looked at about 2,000 players drafted between 1996 and 2003 and found 15.7 percent had filed for bankruptcy within 12 years of retirement.

The findings are honestly pretty shocking, but they're not exactly new. ESPN has covered athletes who have gone broke, and a good majority are former NFLers.

"What if I told you even winners can end up losing everything?"

The researchers also pointed out that even though a player's been in the league for a while, that doesn't save them from going broke.

In recent years, NFL greats like Lawrence Taylor, Michael Vick and Terrell Owens have all filed for bankruptcy.

And perhaps these latest numbers aren't as staggering as previous estimates. A 2009 Sports Illustrated article says within two years of retiring, 78 percent of NFL players had gone bankrupt or were under financial stress due to "joblessness or divorce."

The NFL knows players falling on hard times — both during their time in the league and afterward — is a possibility and have implemented new programs to help guide young players to financial stability.

Before hitting the field, NFL rookies are required to go through a 12-week symposium, which includes financial advice from advisers, former coaches and former players.

The study was compiled by researchers at the California Institute of Technology, George Washington University and the University of Washington.