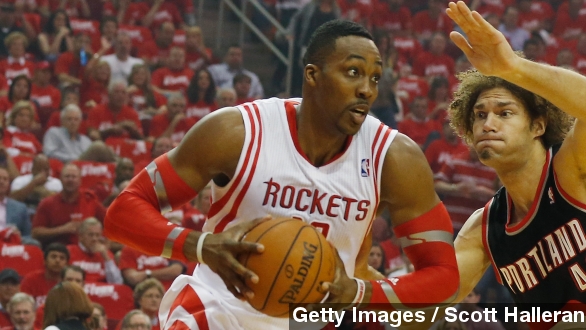 NFL running back Adrian Peterson found out Tuesday he won't be allowed back on the field until at least 2015.

NBA center Dwight Howard, on the other hand, spent his Tuesday practicing to take the court against the LA Lakers.

Both players have been accused of child abuse — though Peterson has already gone to court and pleaded to lesser charges. But the fallout of the accusations could be taking different routes.

Georgia authorities are investigating Howard for allegedly hitting his son with a belt. According to TMZ, Howard admits to doing so and says he was disciplined that way as a kid.

Which is pretty similar to Peterson's story, except in that case, photos of the alleged abuse leaked to the media. Peterson admitted to hitting his son with a switch, or a tree branch, and also said he was "whooped" growing up. (Video from KHOU via USA Today)

The NFL suspended Peterson after he was arrested, not before. The NBA has not commented on the investigation of Howard.

Both Georgia and Florida authorities have previously investigated Howard for similar claims of child abuse, but neither found enough evidence for charges. Now, Georgia authorities are reopening the case. (Video via WAGA)

But criminal charges aren't necessarily needed for a player to be suspended. Baltimore Ravens running back Ray Rice is currently suspended from the NFL indefinitely, even though there have been no criminal charges after he reportedly punched his fiancee.

And it's that case, and the backlash against NFL Commissioner Roger Goodell's original two-game suspension, that could affect Howard.

The NBA announced in late September it was taking a look at its own domestic violence policies, with league Commissioner Adam Silver saying: "We learn from other leagues' experiences. We're studying everything that's been happening in the NFL."

Then, just a few days later, Charlotte Hornets player Jeff Taylor was arrested for domestic assault in Michigan. The league suspended Taylor indefinitely, and he hasn't returned to the team yet.

The NBA so far has not released a statement about the situation or acknowledged the investigation.