How New York's Chimp Rights Case Got So Confusing 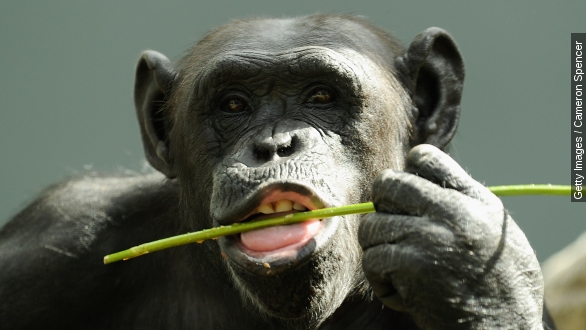 SMS
How New York's Chimp Rights Case Got So Confusing
By Steven Sparkman
By Steven Sparkman
April 21, 2015
The headlines saying a New York judge granted chimps human rights were premature, but the case is still a victory for the Nonhuman Rights Project.
SHOW TRANSCRIPT

The confusing issue of where animal rights end and human rights begin got more confusing this week with the widespread headline that two chimpanzees were granted human rights by a New York court. (Video via The Humane Society of the United States)

The story stems from a lawsuit filed by the Nonhuman Rights Project, a nonprofit dedicated to gaining legal rights for animals.

The group filed for — and got — a court order challenging Stony Brook University's "detainment" of two chimpanzees. Representatives from the university will have to give the court cause for holding the chimps for medical research at a hearing in May.

This is the same group that argued for a chimp named Tommy to be given legal rights last year. Judges denied Tommy a writ of habeas corpus — which is a challenge to one's detention — saying chimps can't have legal rights because they don't have legal responsibilities. (Video via WNYT)

The group trumpeted Monday's news as a victory on its website, saying, "Under the law of New York State, only a 'legal person' may have an order to show cause and writ of habeas corpus issued in his or her behalf. The Court has therefore implicitly determined that [the chimps] Hercules and Leo are 'persons.'"

That's all true to a certain extent, and it's farther than the last case got, so it's not surprising that the news about chimps getting human rights spread quickly Monday. But the situation is, of course, a bit murkier.

Other outlets were skeptical. The New York Times characterized the judge's order Monday as "largely administrative" and a law professor told The Huffington Post, "'The chimps are being treated, for the moment, as persons,'" but "The judge could later reverse the decision."

The Nonhuman Rights Project walked back its earlier language Tuesday in a cautiously-worded update about the legal status of the case.

But it's easy to see why the group would be quick to declare victory. Its website makes repeated references to "breaking the legal wall" separating humans from nonhumans.

"Right now, nonhuman animals are considered property, and while they have certain — usually very weak — protections, they have no more actual rights than a tennis shoe, a car or a DVD player," the group said in a video.

The group's immediate goal seems to be getting any court to grant any nonhuman animal any exclusively-human right. Basically, it's fighting for the legal precedent.

The fact that the judge's order Monday included a writ of habeas corpus means it comes very close to satisfying that goal. But the near-victory didn't last long.

Tuesday afternoon, the group tweeted that the judge who issued Monday's ruling had amended it by "striking out the words '& writ of habeas corpus' from the title of her order."

"If you do believe that's what this is, you may be in for a rude surprise," Danny Cevallos said.

"I think it's going to get thrown out after the hearing," Paul Callan said.

If the group does win, it's asking that the chimps Hercules and Leo be transferred to a sanctuary in Florida. The hearing is set for May 6.