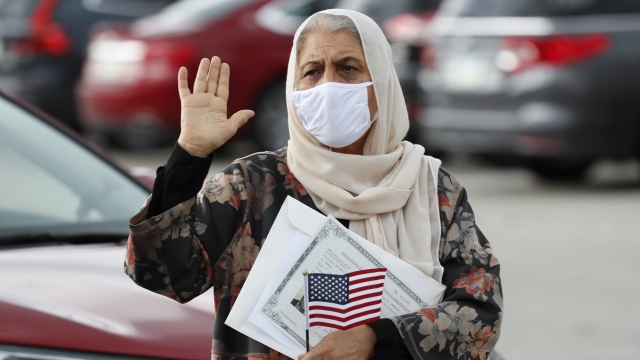 SMS
Naturalization Delays Could Hold Up Scores Of Prospective 2020 Voters
By Ben Schamisso
By Ben Schamisso
July 10, 2020
The U.S. has resumed citizenship ceremonies. But virus delays and a looming budget crisis may put 2020 voting out of reach for hundreds of thousands.
SHOW TRANSCRIPT

U.S. immigration officials have resumed citizenship oath ceremonies across the country, though in smaller-sized groups.

That's good news for more than 100,000 immigrants who were cleared to naturalize before the pandemic but have been waiting for ceremonies to restart.

For nearly three months, the Trump administration canceled most citizenship interviews and ceremonies, saying it wanted to keep applicants and staff safe during the pandemic.

At the same time, immigration officials rejected bipartisan calls to administer the Oath of Allegiance remotely because of "logistical challenges" and "security concerns."

U.S. Citizenship and Immigration Services, the agency that oversees legal immigration, tells Newsy it's working around the clock to make up for the lost time. But analysts estimate that hundreds of thousands of people who were on track to gain citizenship in time to vote in the 2020 election may now miss out on that opportunity.

"It's a few hundred thousand people that USCIS would have to complete various procedures for in time for the election at a time when they don't appear to have the resources to do that," said Randy Capps, the director of research for U.S. programs at the Migration Policy Institute.

That could impact some swing states on Election Day.

"The margins were really, really close in Pennsylvania, Michigan, Wisconsin last time. And, you know, even a few thousand might make a difference there. Or it could have a big impact in Florida. There are a lot of people naturalizing there, even possibly Arizona or Texas," Capps said.

The naturalization delays could soon get worse. USCIS is facing a budget crisis that's threatening to largely shut down all immigration services. Because it's running out of money, the agency is set to furlough roughly 70% of its workforce on Aug. 3 unless Congress gives it $1.2 billion in emergency funding.

"That means everything that we do is going to be dramatically slowed down and delayed. So it could be citizenship. It could be somebody adjusting status to get a green card. It could be a marriage interview. It could be an asylum application," said Michael Knowles, the president of a union that represents 2,500 USCIS employees in the Washington, D.C., area.

Knowles wants the American public to fully grasp how nearly shutting down USCIS would deeply affect the nation.

"Our service industry, our agriculture, our high-tech industry. Every business that employs lawful permanent residents or immigrants who are authorized to work. All of those economic parts of our economic system will suffer," said Knowles.

USCIS is almost entirely funded by the fees it collects from immigrants' applications. The agency says it needs a bailout because the pandemic greatly reduced applications. But experts say the Trump administration's restrictive immigration policies and emphasis on vetting are the main reason for the agency's financial woes.

"They're spending more with the increased vetting and they're taking in less because fewer people are applying. And this had already created a deficit even before the pandemic," Capps said.

USCIS tells Newsy that "in the event of a furlough, we will continue to conduct naturalization ceremonies, but we anticipate it will be on a more limited basis."