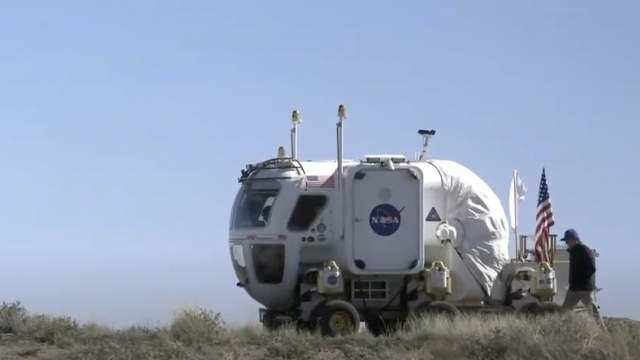 A desolate, rocky lava field about an hour north of Flagstaff, Arizona, is the perfect stand-in for lunar terrain. NASA is there testing technologies, including a prototype rover, as part of its plan to send astronauts back to the moon.

"The crew starts driving, and they start assessing different rover capabilities and features," said Marc Reagan, NASA Desert RATS program mission manager. "Then they get out, and they do a simulated spacewalk."

The futuristic, 12-wheeled rover has come along way since the dune buggy design of the Apollo days.

Astronauts can live and work inside the rover for weeks at a time, using it as a base for moonwalks.

Inside, there's food, water and tools to help collect samples of moon rocks.

It's all part of NASA's Artemis program to send the first woman and person of color to the moon later this decade. NASA wants to use the moon as a testing ground for technologies that will eventually pave the way to Mars.

"It teaches us about how this planet came to support life," said Reagan. "I think it also enables our species to start that slow expansion throughout the solar system and maybe one day through the universe."

NASA is hoping what it learns there will help jump-start decades of human exploration far into the cosmos — a journey that begins, for now, in a simulated moonscape.