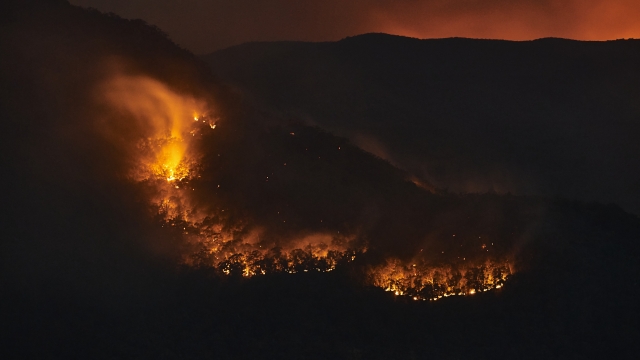 SMS
How NASA Is Using Satellite Systems To Help Fight Wildfires
By Meg Hilling
By Meg Hilling
January 30, 2020
NASA is using instruments aboard satellites to detect, identify and track large fires all over the planet.
SHOW TRANSCRIPT

"What we see is a part of the Earth's surface that's hotter than its neighbors. So these are sometimes called thermal anomalies," said Dr. Doug Morton, Chief of the Biospheric Sciences Laboratory at NASA's Goddard Space Flight Center.

Long before wildfires race across your screens, they come across NASA's.

"We do have eyes in the sky, and they are taking information in a very consistent way, which lets us look at the long-term patterns and trends," Morton said. "Every year, we detect millions of hotspot anomalies or active fire detections."

Over the last 20 years, NASA has used satellites outfitted with a variety of measuring instruments to detect, identify and track fires all across the planet. These systems can pick up heat signals using technology like thermal infrared imaging, and they're precise enough to pinpoint large fire activity to within a couple hundred meters. Because of how quickly these systems move in orbit, this can happen hourly.

"It's true that especially in remote landscapes, satellite data are the first indication that a fire is burning," Morton said.

Morton says the collection of this near-real-time data is transmitted to hundreds of ground stations worldwide, as well as made public online with platforms like NASA's Fire Information for Resource Management System. As a result, millions of acres of large fires around the world are mapped out by NASA every year.

"So the data literally goes from our satellites down to the smartphones of folks responsible for fire management and fire response in a matter of minutes," Morton said.

Along with providing fire crews crucial information on the location and size of these fires, the data has also produced a timeline of fire activity for scientists to study.

"With climate change, we're seeing an increase in the fire activity, especially fires that are large and burn in a fashion that's extremely difficult to put out in places like California or Portugal or Australia. And that's completely consistent with our understanding of how those regions are becoming more fire-prone. But globally, the picture is somewhat different."

According to Morton, some aspects of global fire activity are actually decreasing. He attributes this to the fragmenting of savannas and grasslands. Fires that would have once covered miles on end are running into roads and farms that cut off their fuel.

"So we've actually seen a 25% decline in the total amount of burning worldwide in just two decades."

Even with this knowledge, Morton says it's crucial that these monitoring systems keep advancing. He says that will let the global community use the collected data to take further action in addressing wildfires.