How Much Will Jeb Bush Embrace His Brother's Presidency? 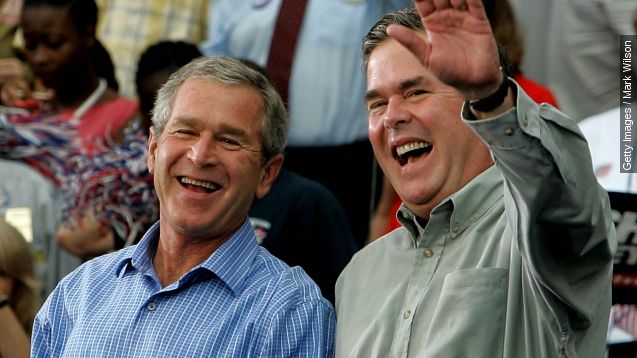 SMS
How Much Will Jeb Bush Embrace His Brother's Presidency?
By Eugene Daniels
By Eugene Daniels
October 16, 2015
Jeb Bush continues to defend his brother's presidency, which is good for their bond, but is it smart politics?
SHOW TRANSCRIPT

"When you talk about George Bush, say what you want, but the World Trade Center came down during his time," Donald Trump said. (Video via Bloomberg)

Friday, Donald Trump sat down with Bloomberg and kind of blamed President George W. Bush for the 9/11 terrorist attacks. (Video via Donald Trump)

Bush and Trump have publicly sparred about George W. Bush's legacy on the campaign trail before.

"Your brother and your brother's administration gave us Barack Obama, because it was such a disaster," Trump said during the second presidential debate.

“You know what? As it relates to my brother, there’s one thing I know for sure. He kept us safe,” Bush retorted.

That moment may have gotten Bush a nice applause during the debate, but it begs the question whether defending his brother's legacy is a smart political move. (Video via CNN)

"That is not really a good political position for Jeb Bush to be in. People still have a certain weariness, including Republicans about George W. Bush," Republican strategist Liz Mair said.

And it seems to mark a shift in the Bush campaign. The former governor had seemingly been trying to distance himself from his last name at the beginning of his campaign.

But The New York Times suggests embracing Bush 42 could be a good move as former Governor Bush slides in the polls. One writer points out the former president "remains highly popular with Republican primary voters in Iowa and South Carolina." (Video via Jeb Bush)