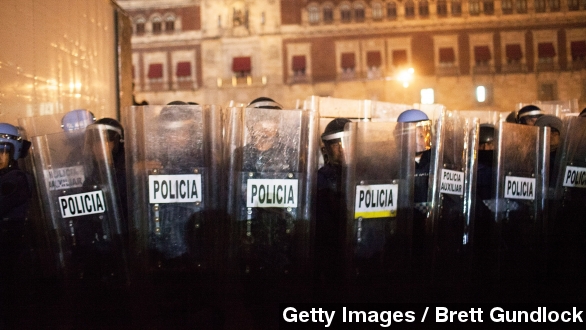 Under pressure from protesters —

“Step into our shoes. Think about the families of our fallen colleagues!”

That would mean dissolving the 1,800 forces — starting with four states considered the most violent, including Guerrero, where in late September —

— local police attacked 43 students on their way to a protest. All of those students are believed to be dead — and local police are accused of acting on the orders of the local mayor to deliver the students to a local gang to be killed. (Video via Vice)

Iguala Mayor Jose Luis Abarca allegedly told police to intercept the students to keep them from interrupting a speech his wife was about to give. And that’s reignited debate over corruption and collusion in all levels of Mexican government.

Which brings us back to Pena Nieto’s plan to dissolve municipal police forces. See, local police forces can make as little as $370 a month. That — plus what critics call poor training — creates an environment ripe for bribery.

To clarify — at least for now, Mexico doesn’t have a nationwide police force or a single phone number for residents to report crimes. (Video via CBS)

So Pena Nieto’s proposal — which will go to Congress soon — would essentially allow for the dissolution of local governments. It would centralize law enforcement, standardize training, and set up a nationwide emergency phone number — kind of like 9-1-1 in the U.S

It’s not the first time police reform has been proposed in Mexico, and the president’s plan could take some time to implement — so it’s unlikely the latest will relieve Pena Nieto of much heat.

Those 43 students are still missing — and until they’re found protests are likely to continue.