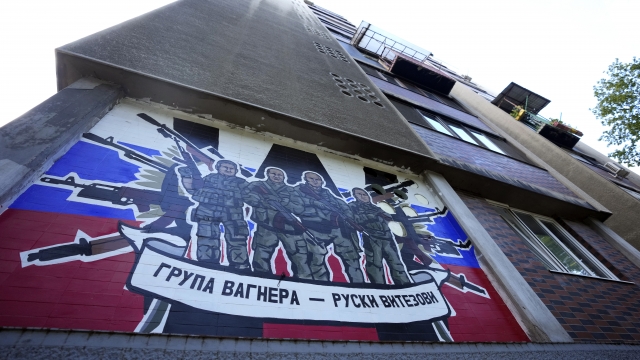 Mercenaries and private security have been in the spotlight after a viral video showed Russian prisoners being recruited to join war efforts.

Vladimir Putin's nation-wide draft of potentially hundreds of thousands of Russians for military training and deployment in Ukraine is ongoing.

The news signals a new chapter in the invasion of Ukraine, after weeks of reports that Russian forces were weakening and retreating from the front lines. One video recently went viral showing Russian prisoners being recruited to join the war efforts in exchange for commuting their sentences.

The recruiter for the group is thought to be Yevgeny Prigozhin, a close contact of Vladimir Putin himself, who has long denied being affiliated with Wagner, a notorious mercenary group, until this video was released.

"I am a representative of a private military company – you have probably heard of it; it's called PMC Wagner," Prigozhin said in a video.

Prigozhin has since admitted to being its founder and head. In a video, he offers work with Wagner, which many analysts and the U.S. State Department have linked directly to the Kremlin. The group has reportedly been active in the Ukraine invasion, with some of its members accused of killing civilians.

Wagner is used as somewhat of an extension of Russia around the world, and Prigozhin seems to be giving a "recruiting pitch" about joining the war in Ukraine, offering freedom after six months.

As far as researchers can tell, the Wagner group actually doesn't seem to be one single company. It's more like an affiliation among many businesses and assets, linked by Russian ownership and networks.

The group emerged in 2014 in Ukraine, helping the Russian military annex Crimea, and since then has reportedly been involved in a range of global conflicts from Syria to Libya to Mali, usually assisting Russia's military or Russian political interests.

The Kremlin denies any connection to the group, but the prison recruitment video is some of the clearest recent evidence showing a connection.

The Wagner Group may very well not be the only private contractors in Ukraine today, although they're definitely the most notorious. Their recent activity there has put the entire mercenary and private security industry suddenly in the spotlight.

"There are many different types of actors, firms, types of activities that we might lump under the private security industry — one of them are mercenaries," said Erica Gaston, head of the conflict prevention and sustaining peace portfolio at the UN University Center for Policy Research.

"A mercenary was only someone who was fighting in an armed conflict, was not a national of any of the parties to the armed conflict, and was fighting primarily for the purpose of financial gain," said Gabor Rona, former chair of UN Working Group on Mercenaries. "It's an extremely narrow definition."

It's difficult to say exactly how much revenue is earned for the private military and security industry globally, but what's clear is there has been a surge of demand for these companies within the last couple decades.

"Modern private security companies or private military firms really got their start in the 1990s, so in response to the end of the Cold War, you had demobilization happening on both sides in lots of different countries," Gaston said. "So, you have this flush of fighters kind of in the market."

British mercenaries were heavily involved in the Sri Lankan civil war, and some are being investigated by U.K. police for possible war crimes. The United States also uses private security companies in a range of conflicts. Most infamously, a number of members of the firm Blackwater were part of a convoy responsible for the Nisour Square Massacre in Iraq, where they fired on a crowd of unarmed people. Four members of Blackwater were charged with manslaughter and murder in 2014 but were eventually pardoned by former President Trump.

There are a number of reasons why a state government might hire companies for combat, but there are two major "advantages."

One is that using mercenaries can be politically safer than official military deployment. It keeps official deployment numbers low, making it seem like a country is less involved in foreign affairs, and it avoids a potentially risky or unpopular declaration of war back home.

As the U.S. slowly pulled troops out of Afghanistan during the Obama administration, its use of private security contractors in the country rose to over 5,000.

The average citizen is also much less aware of mercenary activities than, for example, that of a national military, which allows some major conflicts to skirt under the radar.

For example, many would point to 2018 as the most lethal battle between the U.S. and Russia since the Cold War, but many might be forgetting the strike in Syria, where U.S. commandos defeated an estimated hundreds of members of the Wagner group — who were aiding loyalists to President Al-Assad. Russia denied any connection with Wagner and their attack.

Another benefit for employing private armies is the lack of accountability, which becomes much harder for private companies than it already is for national militaries.

Russia is seeking to bolster its military as its Ukraine offensive has bogged down and sapped its forces.

"They may be registered to do business in one country," Rona said. "They may recruit their personnel from another country. They may have a contract to engage in operations from a third country. Which country has courts that are able to put that individual on trial is a very complicated issue."

"While it's not true for all private security actors, you know that they have a record of abuse or that they have problematic behavior," Gaston said.

International regulation for the use of mercenaries is very limited and rarely enforced. In 2001, the UN created a treaty banning the hiring of mercenaries, but critics have pointed out the treaty has too narrow a definition of mercenary to really be useful in the age of private security companies. Beyond that, only a few dozen countries have signed the treaty — not including some major ones involved in the industry.

"The U.K. government has never passed a law banning this when there has been a move by campaigners or some politicians to pass a ban," said Phil Miller, chief reporter at Declassified UK. "The Foreign Office has pushed back quite hard and successfully against that. They've also lobbied at the UN to stop an international ban on mercenaries. They were very involved in watering down the only real international law that has some constrictions on mercenary activities."

"We don't have standing international legal regulations on them largely because of U.S. and U.K. objections," Gaston said. "But also by the flipside, Russia also has some of the strictest domestic prohibitions and criminalization of mercenaries and private security companies. There can be a difference between domestic regulations and what is actually tolerated in practice."

As long as major power players on the international stage keep privatizing their militaries, the use of mercenaries is going to only grow, which circles back to Wagner.

The Wagner group presents a unique political dilemma going forward. Some analysts have argued it's misleading to call them "mercenaries" given their close ties to the Kremlin. Wagner has helped Russia fight proxy wars and spread Russian influence in the Middle East and Africa, but so far, the U.S. hasn't had much of a strategy to combat this, according to a number of diplomatic and military insiders.

As long as the U.S. and the West are also dependent on private military companies, it seems the mercenary industry will only continue to grow, along with their influence on global conflicts like Ukraine.