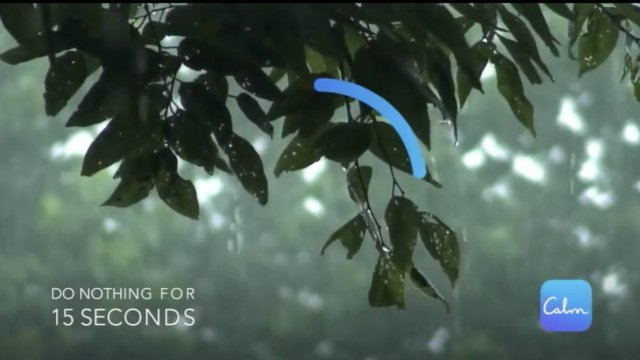 Meditation apps boomed during the pandemic, but the trend was building before. Now some companies are worth billions of dollars.

Meditation is an ancient religious practice, dating back thousands of years as a religious tradition in faiths like Hinduism and Buddhism. And while Western health and wellness traditions have promoted meditation for decades, business is booming the last few years, especially for meditation apps.

Some of the companies making the most popular meditation apps are now worth billions of dollars.

The Calm app, with ads that appear frequently on U.S. TV and with partnerships with celebrities Matthew McConaughey to LeBron James, was valued in 2020 at $2 billion. Fellow meditation app Headspace merged with online mental health platform Ginger last year to form a company worth $3 billion.

So, is this just a pandemic-related boom, as people think more about mental health? Actually, the numbers show this was a trend that was building even before the pandemic.

A report from the CDC found that more than 14% of American adults were using meditation as a health approach in 2017, three times as many as they found when conducting the same survey in 2012.

And the COVID-19 pandemic has left millions of Americans looking for mental health help. Data from the health statistics nonprofit KFF found that in March of this year, nearly a third of all Americans reported symptoms of anxiety or depressive disorder.

It’s led to people turning to meditation as a mental health tool. Therapist Dr. Joanne Frederick has seen the effects for her clients.

There isn't a ton of information or studies on the effects of meditation and mindfulness, but the research we do have seems to suggest it might help. Plus, making that more accessible can make a difference.

"It may be the question is not relevant in everyone's circumstances, is like professional care versus an app," said Dr. Stephen Schueller, UC Irvine professor and executive director of One Mind PsyberGuide. "It's an app versus nothing, and what we do find is that although apps, when used on their own, lead to consistent but small to moderate benefits in mental health, you know, it may be better than nothing in some circumstances. I do think that digital tools have the opportunity to scale and provide sort of a base level of access and resources to people who may not receive care otherwise."

One Mind PsyberGuide is a website that rates mental health apps for how easy they are to use, how well they protect user data and how well they follow evidence-based research.

Studies have found benefits to meditation, but the sample sizes for that research tend to be small. Outside of a few of the largest ones,  the effects of most meditation apps have not been studied.

Then again, to get the most out of meditation, it takes more than just hopping onto an app for a few minutes when you’re stressed, according to yoga studio owner and teacher,  Arundhati Baitmangalkar.

"Most people, they're running around, they're on Zoom meetings," Baitmangalkar said. "The next moment they've opened an app and they're sitting there. Their mind is still like swirling. Their body has been conditioned to hold them in that space. So it's just an unpleasant experience, and most of us think when we close our eyes that it's going to be really blissful. But when we close our eyes and we think to meditate, we'd actually be confronted with how troubled our minds can be, how busy our minds can be."

But even with signs of benefits, there are some concerns tied to these apps and to the business of meditation.

Meditation has long been a traditional religious practice in Asia, but the most successful meditation apps are American or European and were created by white men.

Cultural appropriation concerns have come up before in the health and wellness world, with both meditation apps and yoga.

"There is no giveback, right, there is each one of these people, even these meditation apps and even a lot of things in yoga," Baitmangalkar said. "How many of them really acknowledge where this tradition came from? And they talk, they take the practice and they package it and they get really fancy technology and PR companies, but there's no acknowledgment."

Some Indian and Indian-American yoga teachers who have spoken up about the issue say there's a window to create positive opportunities.

"For teachers and practitioners, we all have good intentions," said Susanna Barkataki, founder of Ignite Institute for Yogic Leadership and Social Change. "It's not that anyone is out there thinking, 'Oh, ha ha, I'm going to colonize mindfulness meditation and steal it,' you know, and take it and then do nefarious things with, you know, my meditation practice."

Barkataki is a yoga teacher and author of the book "Embrace Yoga's Roots." She says some of the larger meditation apps have a chance to introduce people to more to the original works that inspired meditation.

"There's a few things that these apps can do, and, you know, as, again, one of the most important things is to go to the root of the wisdom traditions, and so to teach the fullness of that tradition," Barkataki said. "So offer people the rich, diverse teachings to actually educate on the language, like preserving the language, so South Asian teachers, teachers, diasporic teachers in India still in their apps… Many people access these sorts of mental health-focused apps through their employer, and over the past couple years, we've seen a real shift in how people view their companies' mental health resources."