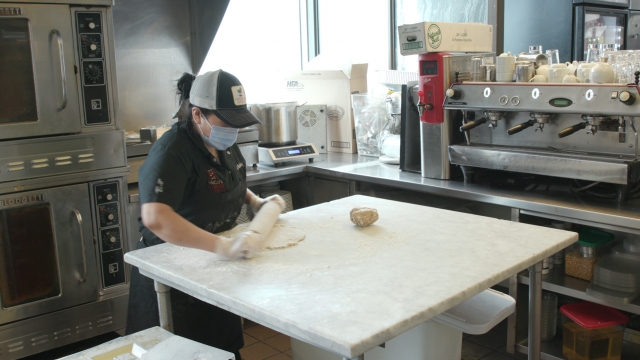 SMS
When Is A Group Too Big To Dine Out Together? The CDC Won't Say
By Patrick Terpstra
By Patrick Terpstra
May 20, 2020
In the absence of CDC standards, states are coming up with their own rules for how many people can share a table at a restaurant during the pandemic.
SHOW TRANSCRIPT

Dan Simons is planning for the day his Founding Farmers restaurants in the Washington area can finally move beyond to-go orders and back to serving guests at tables.

One thing he’s yet to decide is just how many people should be allowed to sit at those tables.

“Six sounds like a really good number to me. Maybe that number is eight,” Simons said. ”Ten feels a little big.”

As states weigh things like where cafes should put hand sanitizer and which employees should wear masks, they’re also deciding how many people can sit together.

They’re coming up with different limits, even as they all battle the same virus.

A table for six is the maximum in many states, including Iowa, Texas and Wisconsin.

In Alabama, eight can be seated at a table.

And in states including Arkansas and Virginia, a party of 10 is allowed.

States are also setting different rules for how many people can be in a restaurant at one time, a range from 25% of maximum capacity to no limits at all.

The CDC posted new guidance for how restaurants can safely reopen, including a recommendation for tables to be six feet apart, but did not give specific recommendations for safe numbers of people in a restaurant or at a table.

The lack of guidance is surprising, says Matt Seeger, who studies crisis communications as dean and professor at the College of Fine, Performing and Communication Arts at Wayne State University.

“What we would expect in a circumstance like this is for the CDC to give some relatively detailed guidance or suggestions on how to sort through those questions,” Seeger said. “Those capacities just don’t exist at the state and local levels."

The CDC leaves it to states and local authorities to set seating limits based on the virus spread and demand on health care systems in their own communities, according to its guidance.

“I do believe the CDC could do more and certainly has the capacity to do more,” Seeger said.

“Reach out to CDC and we’ll give guidance directly to anyone in your state on any circumstance your state desires guidance from,” he said.

With restaurants in three states and Washington, D.C., Simons will be following four different sets of rules as he determines when a family or group of friends is just too big to dine together safely.

“We'll probably pick one number and do that consistently regardless of what state we're in,” he said, adding that he wants his staff to also feel safe with the number. “That is my job to create an environment that folks feel comfortable in.”