How J.Lo's Vegas Show Will Compare To Britney's And Mariah's 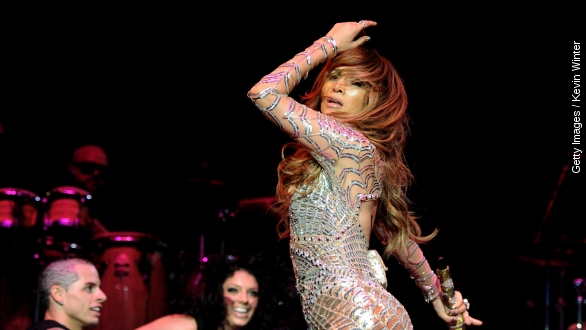 SMS
How J.Lo's Vegas Show Will Compare To Britney's And Mariah's
By Katherine Biek
By Katherine Biek
May 13, 2015
At a time when other female artists have been struggling in Las Vegas, will Jennifer Lopez blow them out of the water with her new show?
SHOW TRANSCRIPT

Book your tickets, 'cause Jennifer Lopez is heading to Vegas. I repeat, J.Lo is going to be performing in Vegas.

"Congratulations to Jen! She just confirmed her residency at Planet Hollywood in Las Vegas, which is a big deal," Ryan Seacrest said.

The news was confirmed during Tuesday night's episode of "American Idol," but it wasn't a huge surprise. (Video via Instagram / jlo)

Rumors began swirling back in December that "Jenny from the Block" may be scoping out a possible residency after she performed to a sold-out crowd at Caesars Palace in Vegas back on New Year's Eve.

"Were you a fan, or were you scoping out the Vegas show scene?" an "Extra" reporter asked.

"I was a fan, and I was checking out the landscape a little bit," Lopez said.

And while Vegas is all about the girl power right now with Britney Spears, Mariah Carey and Celine Dion all performing, J.Lo should be able to "Live It Up" and set herself apart from the rest.

Despite being one of the best-selling female artists in the world, Dion has been performing in Vegas since 2003. (Video via Sony Music Entertainment / Celine Dion)

Spears, who's been a fixture in Vegas since 2013, is having a hard time selling tickets. According to the Las Vegas Review-Journal, her shows haven't been selling out. (Video via Jive Records / Britney Spears)

And Carey did not open to strong reviews in the beginning of May. But, you know, "Love Takes Time." (Video via The Island Def Jam Music Group / Mariah Carey)

A reviewer for The New York Times wrote, "When it came to the notes, though, the struggle was real."

USA Today points out Lopez is also setting herself apart from the rest by how busy she'll be during her Vegas stay.

For most, their Vegas tour is their main gig, but J.Lo will remain as a judge on the final season of "American Idol" and be starring in a new NBC show called "Shades of Blue," which will premiere sometime in the spring of 2016.

So far, dates for her show are currently set for January, February, May and June of next year. Tickets go on sale later this week.