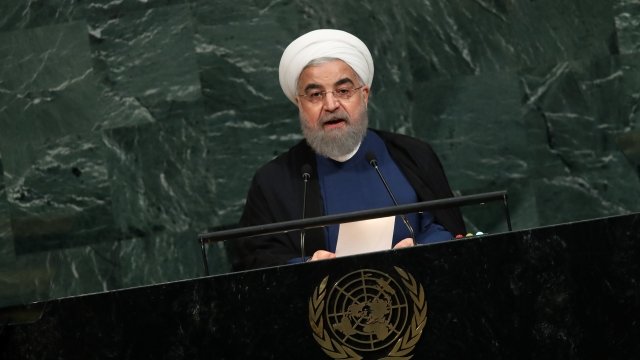 Getting a foothold in neighboring countries is a way for Iran to exert influence.

Iran became "Iran" in 1935. Prior to that, it was known as Persia, with ruling power passing through the hands of natives, Greeks and Arab invaders since 550 BC, reports the BBC.

In the modern era, shahs, prime ministers and military generals have topped the food chain. The year 1953 was a big deal: The CIA and British forces helped the secular shah regain power and solidify control. He then used his own secret police force to keep the country under his thumb.

PBS writes that beginning in 1976, the shah set about changing things like the calendar from an Islam-focused format to one based on the Persian Empire.

It didn’t go over well. In 1978, according to PBS: "Iranians resort to rioting, mass demonstrations and strikes to protest the shah's authoritarian rule. In response, he enforces martial law."

President Donald Trump has the option of backing out of the nuclear deal with Iran in mid-January.

But in 1979 he lost control, and the Islamic revolution, led by Ayatollah Khomeini, seized the reins of government, rebranding the nation as The Islamic Republic of Iran. Ever since, the country's true nerve center, its religious leaders, spread Iran's global influence through ideology, money and infrastructure.

Iranians are predominantly Shia. Gaining power in the region takes some extra work, especially since, as the New York Times reports: "More than 85 percent of the world’s 1.5 billion Muslims are Sunni. They live across the Arab world, as well as in countries like Turkey, Pakistan, India, Bangladesh, Malaysia and Indonesia."

Getting a foothold in neighboring countries is a way for Iran to exert influence, by way of politics and religion, and avoid Sunni hegemony. Take Yemen, for instance.

The Yemeni government, supported by the U.S. and Saudis, is Sunni. Since 2004, the Houthi rebel group, Shias backed by Iran, has been pushing for greater power. The Washington Post says "the group has launched an increasing number of attacks in protest against what it believes is discrimination from the government of Yemen, which is almost two-thirds Sunni."

Houthis seized buildings, TV stations and control in certain areas — again, funded by Iran. In return, the Saudis imposed a blockade, part of which has been eased, but Reuters reports that "Yemen’s situation has remained dire. About 8 million people are on the brink of famine with outbreaks of cholera and diphtheria."

Still, Iran and Saudi Arabia hurtle ahead, in this all-out religious proxy war, The Guardian noting that there’s no end in sight, "with 7 million people dependent on aid in what the UN has described as the world’s worst humanitarian disaster. The civil war has so far claimed 10,000 lives."