How Immigrant Advocates Are Preparing For Possible ICE Raids 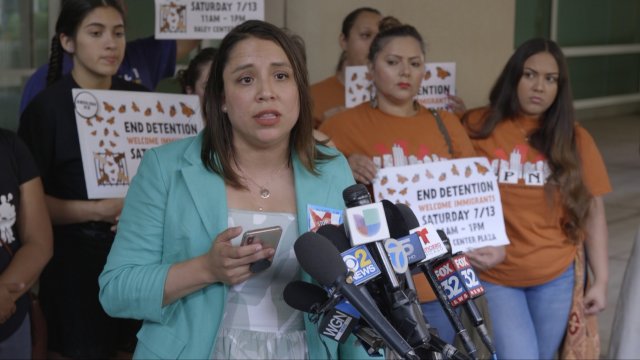 SMS
How Immigrant Advocates Are Preparing For Possible ICE Raids
By Ben Schamisso
By Ben Schamisso
July 11, 2019
Chicago activists have been working around the clock to defend undocumented immigrants. But there's only so much they can do.
SHOW TRANSCRIPT

The rescheduled ICE operation is expected to take place on Sunday in at least 10 major U.S. cities, including here in Chicago. Local immigrant advocates have been working around the clock to inform undocumented immigrants of their rights. But how can they really prevent deportations?

"We're going to do as much as we can. You know, the reality is our laws are written in certain ways. And, you know, we may not be able to just stop or help everybody, but we will fight like hell to make sure that we do."

"Well, ultimately, we don't know the scope of what ICE enforcement activity will look like. But we are prepared and ready to use our voices, to use our bodies, to use our constitutional rights to defend our community."

There's only so much planning local organizers can do. Still, they say informing at-risk immigrants about their rights and the limits of what ICE agents can do goes a long way.

"We've already gone out and knocked on thousands of doors and distributed to thousands of individuals information about their basic constitutional rights that we all have, regardless of our citizenship status. And we want people to know, one, they should not open the door to an ICE agent unless that ICE agent has a warrant signed by a judge, which most of the time, ICE does not. And we also want folks to know that if they see ICE in the community, or if ICE comes knocking on their door, they should call the deportation help hotline."

One acute concern for organizers is the reported possibility of "collateral" deportations on Sunday. That's when ICE agents arrest undocumented immigrants they encounter during raids even though they are not actual targets. These collateral arrests can be relatives of people targeted by ICE.

"Always ask to see the warrant. If you do see that it is valid, allow the person who is on the warrant to go outside, and then you know, make sure that the home stays closed off to the official to not come in. They do have the right to come into the home and to look for that person, which is why we want to make sure that that person exits the home in a manner that keeps everyone else safe."

"What we've seen is that many times, what we'll do is they'll get to an apartment building. They don't have a warrant signed by a judge, but the front door will be open or someone will let them in. And at that point, then they will go and knock on every single apartment door. And they will then have collateral, you know, detentions, where immigrants that they come in contact with who were not initially who they claim to be looking for were then detained and placed into deportation proceedings."

An ICE spokesperson refused to confirm whether the ICE operation will indeed take place on Sunday, but told Newsy that ICE prioritizes the arrest and deportation of undocumented immigrants "who pose a threat to national security, public safety and border security." At the same time, he confirmed that if an undocumented immigrant "is encountered during the course of a targeted enforcement action, then that individual may be subject to arrest." He also stated that immigration law gives ICE agents the power to interrogate and, in some cases, arrest undocumented immigrants without warrant.

Anonymous government officials told The New York Times that the operation will target more than 2,000 undocumented immigrants who have recently crossed the border and have received deportation orders. But the details and certainty around the national operation remain murky.

"I hope that similar to you know, some weeks ago, that this operation is canceled once again, but we can never know."

Either way, local undocumented immigrants say they have a plan for their documented family members to carry on in case of deportations.

"If they knock on my door, I'm ready with an action plan with my family. I already have a plan with lawyers and am getting ready to use my rights; in that plan I have a letter of authorization saying who will own my house, who is going to pay my mortgage, you know, who will pick up my paycheck. So I already have a plan set, and that same plan is being handed out around the community so they can be ready in case of a deportation."