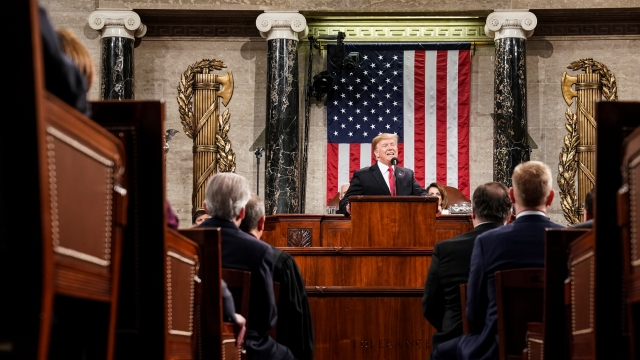 SMS
How Has Impeachment Impacted Past State Of The Union Addresses?
By Bailey Vogt
By Bailey Vogt
February 5, 2020
This was President Trump's first State of the Union since being impeached, but he's not the first president in this position.
SHOW TRANSCRIPT

This has been a big week for President Donald Trump. After delivering his State of the Union address Tuesday, the Senate voted whether to acquit him in his impeachment trial less than 24 hours later.

This was President Trump's first State of the Union since being impeached and he made no mention about his impending Senate trial.

However, it wasn't the first time a president addressed the nation while ignoring his possible removal from office.

President Bill Clinton was impeached in December 1998 for allegedly lying to a federal grand jury about his relationship with a White House intern. A month after, he was tasked with delivering his State of the Union address — in the same room in which he'd been impeached.

Former Clinton speech writer Michael Waldman told ABC News that bringing up the proceedings, which had already begun in the Senate, "never was considered" for his 1999 speech.

Clinton discussed the economy, which had been growing for years; a budget surplus; and the future of Social Security and education. He was later acquitted.

Over a century earlier, President Andrew Johnson wrote his last State of the Union before facing impeachment, but his 1868 speech addressed the law he'd ultimately be impeached over.

After Johnson called post-Civil War Reconstruction in the South "disorganized," he said he believed that the "tenure-of-office" law, which required congressional approval for a president to fire a Cabinet member, was unconstitutional.

A month later, he violated that very law by firing Secretary of War Edwin M. Stanton — after a long history of disputes on Stanton's leadership in Reconstruction. Johnson was impeached, but the Senate fell one vote shy of removing him.

The Supreme Court ruled decades later that the law was likely invalid.

And while he was never impeached, President Richard Nixon used his last State of the Union speech in 1974 to put in a "personal word" about disbanding the Watergate investigation.

He said: "I believe the time has come to bring that investigation and the other investigations of this matter to an end. One year of Watergate is enough."

He also promised to never resign from the presidency.

Of course, months later, he did resign after more information about his involvement in the scandal came to light. That let him dodge impeachment and probable removal from office.

President Trump told reporters Tuesday he had planned to save his thoughts on impeachment for another speech after the Senate's final vote.