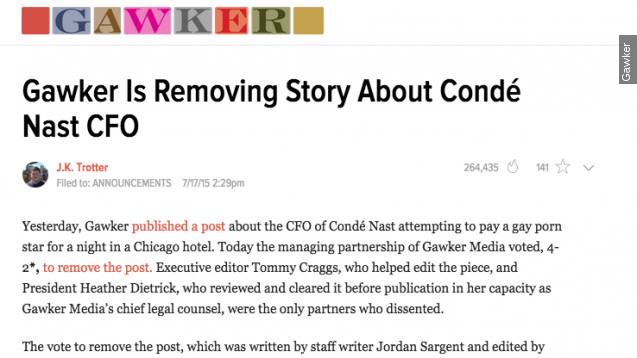 Across the Internet, many blasted the publication for running the story. Gawker eventually pulled it a day after it posted, marking the first time the media outlet has removed a major story for reasons other than a legal or factual issue.

As a result, executive editor Tommy Craggs and editor-in-chief Max Read are stepping down. In statements released Monday by both Craggs and Read, they criticized the company's decision to backtrack.

Cragg said, "The impulse that led to Thursday's story is the impulse upon which [Gawker Media Founder & CEO Nick Denton] himself built Gawker's brand."

Read echoed those words, writing: "I am able to do this job to the extent that I can believe that the people in charge are able, when faced with difficult decisions, to back up their stated commitments to transparency, fearlessness, and editorial independence."

In a statement Friday, Denton said, "The point of this story was not in my view sufficient to offset the embarrassment to the subject and his family."

He followed that up with a new statement Monday, saying the story was "a breach of everything Gawker stands for." (Video via NBC)

To read the full statements from Denton, Read, Cragg and others, head over to Gawker.com.

This video includes an image from Grace Villamil / CC BY 2.0.