Aging Population Is Causing A Climate-Related Issue In Florida 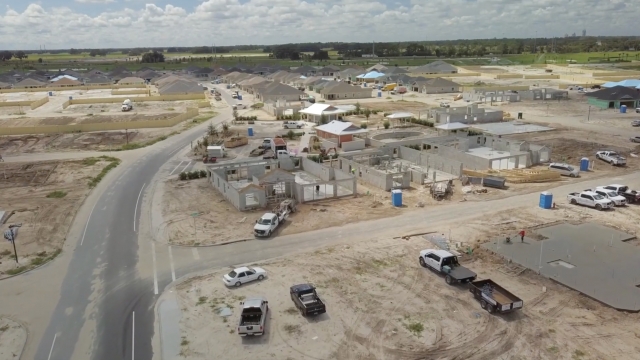 SMS
Aging Population Is Causing A Climate-Related Issue In Florida
By Bianca Facchinei
By Bianca Facchinei
November 2, 2021
A Florida neighborhood is adapting to demand for retirement homes, but it has to balance that with protecting the environment.

America is getting older – so much so that the fastest-growing metro area of the past decade is the 55+ community.

The Villages, located in central Florida, is expanding beyond its 135,000 residents.

NEWSY'S BIANCA FACCHINEI: "What's it like to live here?"

SKIP SMITH: "Free golf for life, if you're a resident here. Where do you get that in Texas? Where you get that anywhere?"

But it's not just golf or any of its other endless amenities attracting residents. It's also the flexible price range for brand-new houses, especially in today's market.

REAL ESTATE AGENT BREE TUCKER: "It's like $250,000 to upwards of $1 million, so there's really a niche market for whatever you're looking for."

FACCHINEI: "How many houses do you sell on average per month?"

TUCKER: "Just in my pipeline, like four to five home sales a month."

The growth points to a significant shift in political power, underscored by Florida gaining an additional seat in Congress this year. It also poses an urgent question: Whether Florida can balance the demand for retirement communities with protecting the environment.

The number of Americans 65 and older is projected to double over the next 40 years, putting all eyes on the retiree-friendly south.

One expert says preserving land instead of building on it is crucial in the fight against climate change.

"One of the best ways of reducing our carbon footprint is to maintain natural land that that absorbs carbon in a way to developed land never could," Paul Owens, the president of 1000 Friends of Florida, said.

The Villages will start developing another 241 empty acres later this year. To Owens, the potential cost of climate damage outweighs the economic benefits developers bring in through new residents and business especially as hurricanes are expected to get worse. He says the better way forward is compact, rather than sprawling, development.

"If you maintain enough natural land to absorb water, you're much less likely to end up with flooding," Owens said.

The Villages did not respond to a request for comment. One longtime Sumter County resident said he's conflicted about the growth.

"The Villages has made it a lot easier for us to make a living, to provide for our families, but it's also taken away a way of life that we were all used to," Mike Brown said.

Brown was hired to clear construction sites at The Villages. He says he's grateful for the work but can no longer recognize his hometown and recently put his house on the market.

That's not the only thing that's left longtime residents unsettled. The county raised property taxes by 25% to fund infrastructure needed for the expansion in 2019.

The Villages' growth demonstrates the challenge of the future. Americans are living longer, and they'll need a place to stay. The question is how to keep pace with demand without sacrificing the environment.