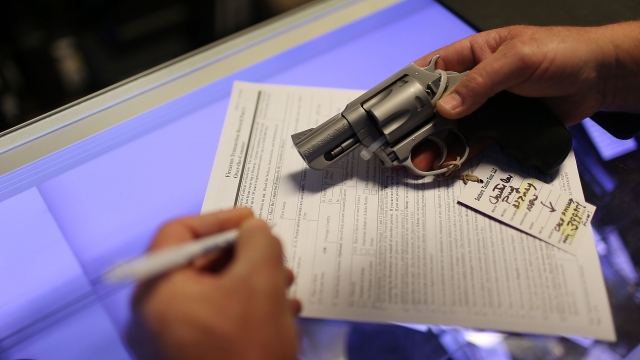 We're learning more about the firearm history of the Midland-Odessa shooting suspect who killed seven people and injured 25 on August 31.

Newsy independently confirmed with the Texas Dept. of Public Safety that the suspect was blocked from buying a firearm Jan. 14, 2014. That denial was because of a mental health issue according to local law enforcement. ABC News reports the suspect got the firearm used in the shooting through a private purchase. In 29 states, including Texas, a background check isn't needed for a private gun sale.

This shooting — and others — have reignited calls for more gun reform from both sides of the aisle.

Texas Lt. Gov. Dan Patrick: "I think one of the things we have to do in this country is take a strong look at this ability for people to buy a weapon when they've been turned down by a background check."

Mayor Pete Buttigieg: "To me, a very middle-of-the-road, rather conservative compromise would be to do background checks, and red flag laws…"

One popular proposal is universal background checks. It would require background checks for all firearm purchases and would close current loopholes that allow guns to fall into the wrong hands.

To buy a gun from a federally licensed dealer, you need to fill out Form 4473 and submit to a background check through the National Instant Criminal Background Check System, or NICS. On the form, there are questions like, "Have you ever been convicted in any court of a felony?," "Have you ever been committed to a mental institution?," and "Have you ever been discharged from the armed forces under dishonorable conditions?" Answering yes to those questions will disqualify you from purchasing a firearm.

We spoke to Kris Brown, the president of Brady, a gun control advocacy group, in late 2018. She's likely referring to the "boyfriend loophole," which allows partners to still purchase firearms, even if they are in a relationship and under a protective order.

"Those are the kind of gaps that we also need to close. And we want to close as part of a comprehensive improvement to the Brady background check system."

Another gap in federal background checks is the "default proceed."

If the FBI takes longer than three days to make a determination in the background check process, a dealer can go ahead and sell a firearm. That's how the convicted Charleston, SC, church shooter was able to purchase the Glock pistol he used to kill nine parishioners and injure one other in 2015. He previously admitted to possessing a controlled substance, which should've disqualified him from buying a gun.

But sometimes, disqualifying information doesn't even make it into the background check system. That's what happened with the gunman who killed 26 people in a Sutherland Springs, Texas, church in 2017. The Air Force said it failed to report the shooter's violent past to the FBI, which allowed him to pass two background checks and purchase firearms after being convicted of assaulting his wife and infant stepson.

It's important to note that states voluntarily offer up criminal records to the databases on which the NICS relies, meaning the background checks are only as effective as participating states allow them to be.

In 2018, President Trump signed into law the Fix NICS Act, which holds federal agencies accountable for not reporting relevant records to the background check system while rewarding states that do comply.

A recent Quinnipiac poll shows that most Americans — over 90%— said they supported universal background checks.

The current House passed bills in February to address the loopholes and expand background checks to most private transfers, but not all. Senate Majority Leader Mitch McConnell said he's willing to bring that legislation to the Senate floor if President Trump signals that he's willing to pass the bills in question.