How Far Would You Walk For A 20-Ounce Soda? 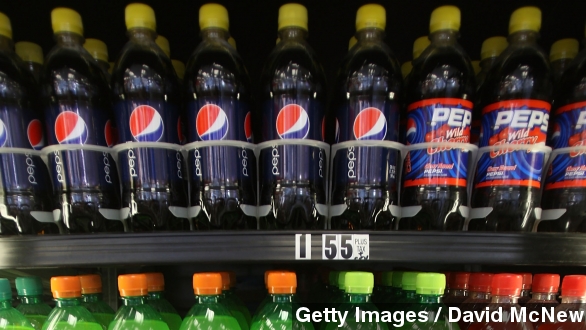 SMS
How Far Would You Walk For A 20-Ounce Soda?
By Bram Sable-Smith
By Bram Sable-Smith
October 17, 2014
A new study suggests printing information about the exercise required to burn off the calories in a soda reduces soda consumption among teens.
SHOW TRANSCRIPT

How many miles does it take to walk off a 20-ounce bottle of soda?

The answer is about five. And knowing that could make people less likely to drink soda.

The brightly colored 8.5- by 11-inch signs carried one of four messages:

--"Did you know that a bottle of soda or fruit juice has about 250 calories?"

--"Did you know that a bottle of soda or fruit juice has about 16 teaspoons of sugar?"

--"Did you know that working off a bottle of soda or fruit juice takes about 50 minutes of running?"

--"Did you know that working off a bottle of soda or fruit juice takes about 5 miles of walking?"

And the study found that last sign to be the most effective at lowering the number of calories teens purchased in sugary drinks. (Video via PBS)

MICHELLE OBAMA VIA THE WHITE HOUSE: "You as a parent and a consumer should be able to walk into a grocery store, pick an item off the shelf and tell whether it's good for your family."

The proposed changes include presenting the total calories in an item that's usually consumed in one sitting, like a soda. In other words, these items will be treated as single servings.

And an often over-looked clause in the Affordable Care Act requires restaurants with more than 20 locations to display the calorie content of each food and drink item they serve. (Video via Fox News)

But as Bleich told NPR, the Johns Hopkins study suggests printing calories might not be the most effective way to inform consumers.

"If we're going to put the information in restaurants, there's got to be a better way to do it. And what this study suggests is that miles of walking may be the more persuasive way."

Bleich noted black adolescents are among the groups at highest risk for obesity. Posting the signs used in the study is a low-cost way to combat that.