How Far Does ISIS Reach? 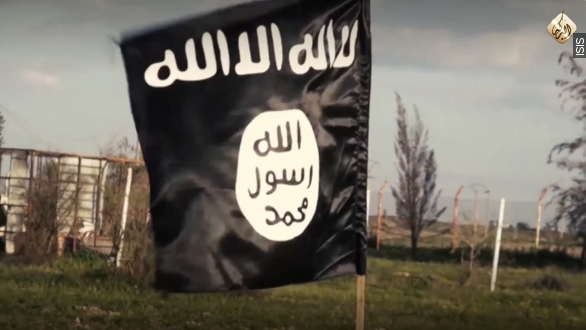 SMS
How Far Does ISIS Reach?
By Jake Godin
By Jake Godin
April 18, 2015
ISIS has taken credit for a terrorist attack in Afghanistan. But how much physical presence does ISIS have outside its loose borders?
SHOW TRANSCRIPT

At least 33 people reportedly died and more than 100 others were wounded after a terrorist blew himself up outside a crowded bank in Afghanistan. A terrorist group based in Iraq and Syria, affiliated with ISIS, has claimed responsibility. (Video via Pajwok Afghan News)

During a trip to Washington D.C. in March, Afghanistan's president Ashraf Ghani warned Congress of ISIS' potential influence in western and central Asia, referring to them by their Arabic acronym, "Daesh."

Ghani told Congress, "It is critical that the world understand the terrible threat that the Daesh and its allied forces pose to the states of western and central Asia."

Friday's attack bore similarities to recent attacks from last month in both Yemen and Tunisia — in both cases, ISIS claimed responsibility for the massacres.

In Tunisia, gunmen attacked a museum popular with tourists. And in Yemen, suicide bombers attacked two prominent mosques. ISIS claimed it was behind both, though the Tunisian government accused a local Al-Qaeda affiliate for the museum attack.

But as ISIS and its affiliates try to take credit for violent atrocities around the world, the question remains, how much physical reach does ISIS have past its strongholds in Iraq and Syria?

It was in June of last year that the self-declared state's leader, Abu Bakr al-Baghdadi announced the creation of a new "caliphate" and the subsequent annexation of Algeria, Libya, Sinai, Saudi Arabia, Yemen and, later, Afghanistan.

But in reality, they don’t control nearly as much territory as their propaganda may claim. The only area they control in a manner similar to their land in Iraq and Syria is in Libya, but even there the land is contested by rival groups and Libyan militias.

But in the places where ISIS is unable to obtain a physical foothold, they still wield one important tool — influence.

And as long as there are groups pledging allegiance to ISIS, we’ll continue to see terrorist attacks bearing ISIS’s stamp of approval — a stamp that doesn’t necessarily mean control.