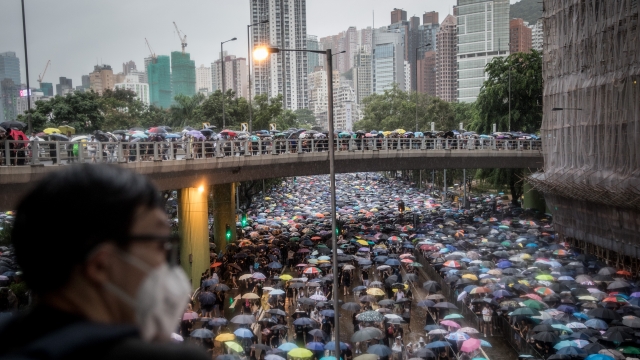 Twitter and Facebook both recently found they were hosting suspect ads: Groups tied to the Chinese government were buying advertisements that spread disinformation about Hong Kong protests. The companies have now banned the responsible accounts, but Twitter has taken a harder line than Facebook.

These ads are somewhat surprising, because China blocks access to Twitter and Facebook — they're outside the Great Firewall, which limits what Chinese citizens can see online. But the ads were more likely to reach the millions of users in Hong Kong, where the sites aren't blocked.

According to Buzzfeed, state-run press organizations and Chinese Communist Party-owned news outlets reportedly paid Twitter to promote nearly 50 Tweets, some of which depict Hong Kong demonstrators as a "public enemy." When Buzzfeed and a Twitter user wrote about the ads, Twitter updated its policy and said it “will not accept advertising from state-controlled news media entities.” This would not apply to independent, taxpayer-funded broadcasters like the BBC, however.

A similar campaign played out on Facebook, but its reaction hasn't been as total as Twitter's. In a statement, Facebook said it would "continue to look at our policies as they relate to state-owned media" — and in the meantime it would still permit some state-owned outlets to run ads on its platform.

Facebook's slower reaction draws similarities to a 2018 incident regarding propaganda in the U.S. A Syracuse University researcher found the United States Agency for Global Media, formerly known as the Broadcasting Board of Governors, had bought ads on Facebook which were directed at U.S. users. This is prohibited by U.S. law.