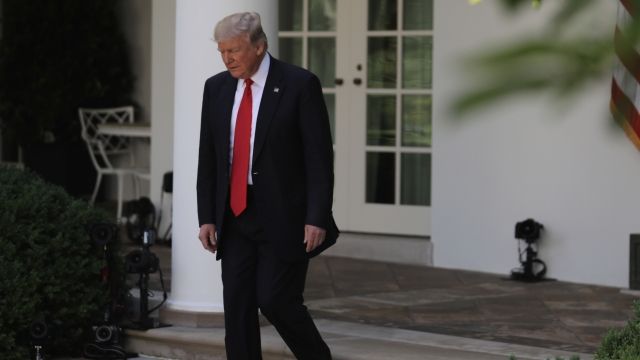 Multiple investigations surround the Trump White House right now, meaning a lot of people will spill some info to Congress and to investigators — unless, the president can stop them from talking.

Executive privilege has literally been around since the beginning of the republic. George Washington invoked it to keep information from Congress in 1792. The most infamous case is probably President Richard Nixon's attempt to to keep the Watergate tapes away from investigators. And President Bill Clinton tried to use it to prevent aides from testifying in the Monica Lewinsky scandal.

The idea of executive privilege isn't in the Constitution, so it can get pretty fuzzy, but presidents have claimed it's implied — that they should be able to have completely confidential conversations with aides without those aides being scared of testifying later.

So could President Donald Trump use executive privilege now? Sure, but like most things, it's a little complicated — thanks to Trump himself.

Take fired FBI director James Comey, for example. Comey doesn't work for the president anymore, so Trump saying Comey couldn't testify would have a little more power behind it if Trump hadn't fired him. And in Trump's letter firing Comey, the president brought up the conversations the two had about the Russia investigation, so claiming those discussions need to be kept secret now probably won't fly.

Legally, there's probably no issue. But this is Washington, D.C., and legality is usually never the only consideration. With allegations of a cover-up of the Russia investigation constantly in the mainstream, trying to keep Comey from testifying for any reason is politically risky.