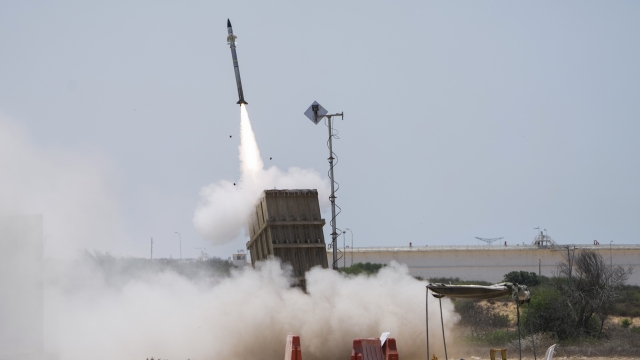 Simple rockets have shaped the history of war, from Chinese projectiles in the thirteenth century, to a famous battle during the War of 1812 — to today’s nuclear warheads, which the government says can travel more than 9,000 miles.

Conventional threats on the modern battlefield, including in Ukraine, involve rockets which follow curved trajectories and missiles, that fly lower and are powered for their full flight. Armies have gradually improved techniques to defend against both.

In World War II, Germany fired about 7,000 V1 missiles at Britain. The British government says it downed about half using anti-aircraft guns. During the Gulf War in 1991, American Patriot missiles were fired at Iraqi long range missiles, though experts questioned how effectively the patriots’ knocked them out of the air.

Modern battlefield air defenses appear to be more reliable. The system destroyed a test missile fired more than 2,500 miles away. The Iron Dome System in Israel has destroyed hundreds of rockets, missiles and mortars fired by Hezbollah in the north and Hamas in the south. When the system detects an incoming rocket, sirens alert Israeli citizens who head to shelters. Then missiles launch and destroy the incoming threats, allowing citizens to return to normal life.

Retired Israeli Air Force General Amos Yadlin said, "thanks to Iron Dome, the army doesn’t have to rush toward entering Gaza with ground forces to attack rocket launchers, which Hamas places next to civilians. This change certainly reduces casualties on the Palestinian side, as well as saving Israelis."

"When we talk about Ukraine's need for air and missile defense, we are talking about real lives that are being taken by terrorists. We managed to shoot down some of the missiles and drones," said Ukrainian President Volodymyr Zelenskyy.

The U.S. is sending a few of its advanced missile systems to help. But experts warn it won’t be enough since Russia is targeting infrastructure all over the country with fast, evasive missiles.

Anthony Cordesman is the emeritus chair in strategy at the Center for Strategic and International Studies.

"If you want effective defenses, you're almost talking national defenses, or at least the coverage of most key major targets," said Cordesman.

Protecting against the ultimate weapon, a nuclear missile, requires a much more sophisticated system. According to one estimate, over six decades the U.S. has spent $280 billion on nuclear missile defense.

If North Korea were to fire missiles at the U.S. the system would launch into action, aimed at tracking and striking the missiles in space before they could land and detonate. The Missile Defense Agency says it has tested the system 20 times and it has worked 11 times.

But critics say these tests aren’t realistic. And they add that they provoke adversaries who think missile defense could give the U.S. an advantage in a nuclear war.

"What freaks China and Russia out is our missile defense program. Even though it’s very limited right now and in my view very ineffective, it’s enough to worry China and Russia right now, not so much about what it can do today but what it might do down the road," said Tom Collins, the director of policy at Ploughshares Fund. "Missile defense is probably the most important issue that no one ever talks about."

But nuclear missile defense enjoys bipartisan support, as both presidents Donald Trump and Joe Biden have sought to expand the system.