How Dreamers Feel About Never-Ending Negotiations Of Their Fate 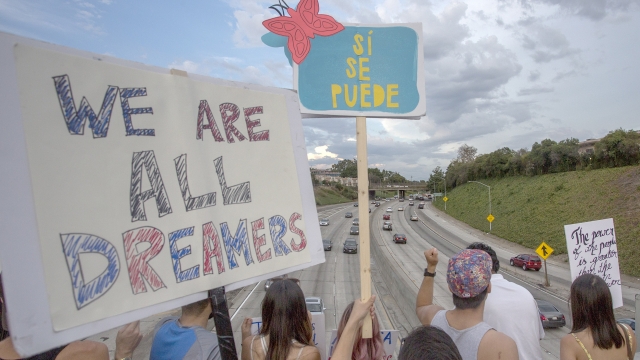 SMS
How Dreamers Feel About Never-Ending Negotiations Of Their Fate
By Ben Schamisso
By Ben Schamisso
February 4, 2019
Last year, President Trump proposed a path to citizenship for 1.8 million Dreamers in exchange for a wall and cuts to legal immigration.
SHOW TRANSCRIPT

I won't hold it against you if you're tired of hearing about President Trump's wall, border security and the fate of young undocumented immigrants.

But I'm sorry. Because you're probably gonna hear about these issues once more during the president's 2019 State of the Union address.

Which is kind of unbelievable because these topics were already front and center during last year's State of the Union. At the time, the president wanted to trade his wall and cuts in legal immigration in exchange for "a path to citizenship for 1.8 million illegal immigrants who were brought here by their parents at a young age."

These young immigrants are often known as Dreamers. They include 700,000 people who currently have DACA protections. Unsurprisingly, many of them are disillusioned from having heard their fate debated by the president and Democratic leaders for more than a year.

"It makes me feel like we're used as a political football," added DACA recipient Egle Malinauskaite.

Thanks to DACA, Janeth Vasquez and Egle Malinauskaite have been protected from deportations and able to drive and work legally for almost seven years. But as immigrant activists, they have long been unsatisfied with DACA's requirements. That's because the program excludes millions of undocumented immigrants, like their parents, who were either too old or too young when DACA was introduced.

"It's really easy to say, 'Well, here's the group of DACA recipients, and then here's everyone else, or the parents who should be blamed for bringing their kids.' That's just not what we see. We're so deeply connected to our communities that you just can't make that difference," Malinauskaite said.

In essence, what Malinauskaite and Vasquez want is a pathway to citizenship not just for them but for most 11 million undocumented immigrants, especially those who have worked here for a while, like their parents. That's a concept that some conservatives call a large-scale amnesty. And many of them strongly oppose it on the grounds that it rewards those who have broken the law and, by doing so, also encourages future waves of illegal immigration.

"Many conservative voters are, for reasons I'm sympathetic to, very resistant to it because they fear it will be the first in a series of amnesties. So, you know, why bother having another one if you're just going to keep disrespecting the laws?" said National Review executive editor Reihan Salam.

"But you know, again, Democrats, they want a broad amnesty without having meaningful changes to legal immigration, partly because they see naturalized citizens, you know, who want to reunite with their relatives abroad as an important political constituency for them," Salam added.

"And it's going to cause a surge in illegal immigration [...] which will come in, there's no question. If we grant an amnesty, they will come in," said former Kansas Secretary of State Kris Kobach on Fox News last year.

Recent polls show a majority of Americans support legalizing Dreamers and other undocumented immigrants who have worked and lived in the U.S. for more than two years. But even if legalization was on the table, the details of that process would be crucial. That's according to Mony Ruiz-Velasco, the executive director of an immigrant rights group.

Ruiz-Velasco: "When they have introduced actual policies that have a pathway to citizenship, oftentimes it's been a 15-year pathway to citizenship. And if you think about people who have been here for many, many years, who now have to go through all these extra hurdles and pay all these extra costs, for many, you know, it's not going to be a reasonable solution. The devil is always in the details, and we have to see those details before we talk about, like, actual deals."

Either way, for the next nine months, Vasquez and Malinauskaite don't have to worry about their protections. That's because the Supreme Court declined to review, for now, President Trump's appeal to end DACA. But even if the justices eventually take up the case and decide to end the program, Malinauskaite says Dreamers will find a way to get by.

Malinauskaite: "I just think undocumented people are resilient, and we would make it work. If there was a threat of deportation, I know that I can make calls to people who might legally support me, who might support me financially. ... From the first day that [DACA] was put into place, we always knew it was temporary. We always knew it was just one president away from being taken away from us."