How Donald Trump Is And Isn't Like Barry Goldwater 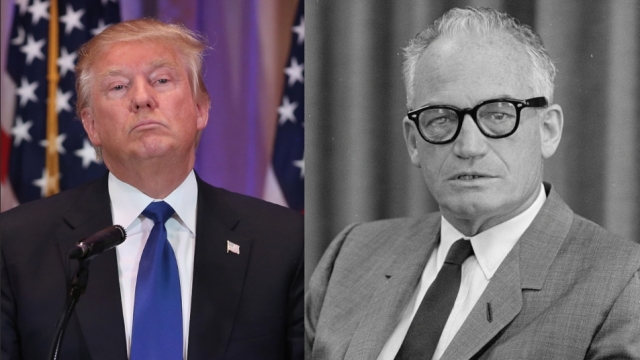 Trump is being compared to former presidential candidate Barry Goldwater, but how much sense does the comparison make?

As Donald Trump continues to steamroll his way through the GOP primary, pundits have begun to compare his rise, and what some see as an inevitable fall, to failed presidential candidate Barry Goldwater.

But is it an apt comparison? Let's take a look at the evidence.

Goldwater was seen by some as an extremist fringe candidate; someone who was disliked by GOP party leaders and the establishment but somehow was able to galvanize the Republican base around his candidacy during the 1964 primary. Sounds familiar doesn't it? But the similarities don't stop there.

To this day, Goldwater has been criticized for playing on the fears of the electorate. As New York Gov. Nelson Rockefeller famously said, "The Republican Party must repudiate these people," when talking about Goldwater and his supporters. And Goldwater, like Trump, also received a strong endorsement from a KKK figure, which critics jumped all over.

So yes, the parallels make a comparison pretty simple, but for members of the #NeverTrump, it could also be wishful thinking.

Goldwater was decimated in the general election against Lyndon B. Johnson. Johnson received a historic 61 percent of the popular vote and won 486 electoral college votes compared to Goldwater's 52.

But it's actually not as easy to say Trump would fare as badly as Goldwater in a general election.

Yes, hypothetical polls have both Hillary Clinton and Bernie Sanders beating Trump in a November general. But Trump has proven himself to not only play the brash yelling billionaire but also the serious general election candidate.

"We want to put that same ability into doing something for our nation. Our nation is in serious trouble," Trump said.

Trump's Super Tuesday speech was more moderate and calm than the candidate usually is; possible proof he's already anticipating moving toward the center during a general election.

And based on Trump's swath of wins in primaries and caucuses, his support isn't as one-sided as you'd think. Virginia, a state with typically moderate Republicans, went to Trump on Super Tuesday. And the myth that Trump can only win with poorly educated voters has also been broken in states including Massachusetts and Tennessee, where he ran the table with all education levels.

So trying to predict Trump's demise is a fruitless exercise. If he's proven one thing this election season, it's that history isn't really telling us much of anything.

This video includes images from Getty Images and clips from C-SPAN, CNN, ABC and NBC.