How Does A Burial Plan Not Include The Cost Of Digging The Grave? 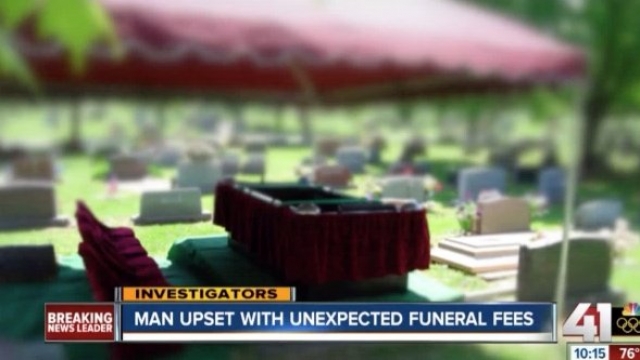 SMS
How Does A Burial Plan Not Include The Cost Of Digging The Grave?
By Ryan Biek
By Ryan Biek
June 21, 2016
A Kansas City man accused a funeral home of tacking on hidden fees to the burial plan he thought he paid off.
SHOW TRANSCRIPT

"He went on to tell me it was going to cost me about another $3,000 to pay for everything," Lockler told KSHB.

Newsy's partners at KSHB report the Kansas City, Missouri, resident got another bill in October. Lockler says he's been duped by hidden fees.

Among the fees in that second wave was the internment fee –– the cost of digging the grave and lowering the casket, which seems pretty counterintuitive to not have as part of the original burial plan.

But the president of Lockler's funeral home told KSHB these fees weren't included because they are future services.

"A future service, by law, would have to be funded in some sort of side arrangement," the president told KSHB.

Taxes also can't legally be included in the original plan if the service hasn't been carried out. For instance, Lockler's casket has yet to be made, so the tax has to go through a side fund.

"I didn't know that there were any additional charges," Lockler told KSHB.

The funeral home says information on the side fees was in the fine print of the original contract. The president told KSHB the funeral home discusses these side costs with all clients, but he couldn't say for certain Lockler was told because his deal was made 12 years ago.

Lockler's funeral home has since dropped his side costs to roughly $600.