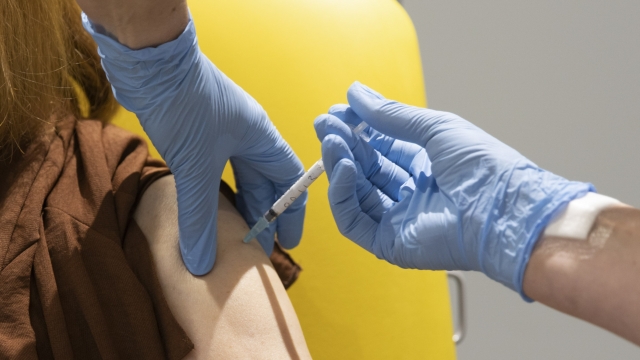 SMS
How Do Vaccine Trials Get Their Volunteer Testers?
By Lindsey Theis
By Lindsey Theis
July 31, 2020
COVID-19 vaccine trials studying results in 30,000 volunteers are underway, but it's not as simple as giving thousands of people shots at once.
SHOW TRANSCRIPT

Jennifer Haller of Seattle is proud to be the first American to ever get a potential COVID-19 vaccine.

"You're looking for ways to help," she told Newsy.

In March, Haller received a low dose of a vaccine developed by the National Institutes of Health and biotech company Moderna. She, like other volunteers, applied for the study online.

"A friend of mine posted on Facebook that Kaiser was starting to enroll participants in the vaccine trial. And I thought, well, let's give this a shot. Let's see if there's something that I can do here," she said.

A Newsy poll found 69% of people surveyed would be interested in getting an FDA-approved coronavirus vaccine, but before getting to that point, many volunteers are needed for the trial phases.

Seattle vaccine tester Neal Browning got an email from a friend.

"'I just got notified that my health care provider, Kaiser Permanente, is offering this registration to see if people are interested in doing the vaccine study forward. Are you interested? I can forward you the e-mail.’ And so I said, yeah, absolutely," he told Newsy.

Volunteers usually get minimal compensation, maybe a few hundred dollars. Risks are explained ahead of the testing, including in multiple questionnaires and consent forms, and an hourlong face-to-face conversation, researcher Dr. Sharon Riddler says.

"It's a lot more regulated. Not in a bad way, but there's a lot more oversight than people maybe appreciate," Riddler told Newsy.

Riddler says it's not as simple as giving thousands of people shots the day the study starts. Clinics take time to become “activated” for a specific study by the FDA and NIH. So, for example, she says while the clinicians at University of Pittsburgh know they’ll need 750 participants, they don’t have every volunteer yet.

"Each site is coming on board over a period of a few weeks, and then the enrollment will really ramp up over that period of time to the maximum possible with all the sites activated. The regulatory mechanisms, the oversight mechanisms, those are all things that are common across all clinical trials really," she explained.

In early July, the NIH started the COVID-19 Prevention Trials Network, or COVPN, as a central way to organize people interested in being part of a vaccine study. It gives researchers like Riddler a head start on applicants.

Who is an important factor in these patient pools, too. Giroir told Newsy researchers also want to examine possible side effects in groups more at risk.

Thousands more volunteers will be needed for other COVID-19 vaccines in the race. Johnson & Johnson is looking toward its own 30,000-patient trial in September, and Novavax in October. The goal with all of these studies is to see if significantly fewer vaccinated people contract COVID-19.

White House coronavirus task force coordinator Dr. Deborah Birx tells Newsy ethics panels are trying to determine who will be the first to get a vaccine once it's approved for widespread use.

"Traditionally they based it on who is most susceptible to illness. And that has always been our first responders, and then who does particularly poorly," she said.

The White House expects a vaccine by the end of the year, but drugmakers say early 2021 is more likely.