How Do Conspiracy Theories Get Their Traction? 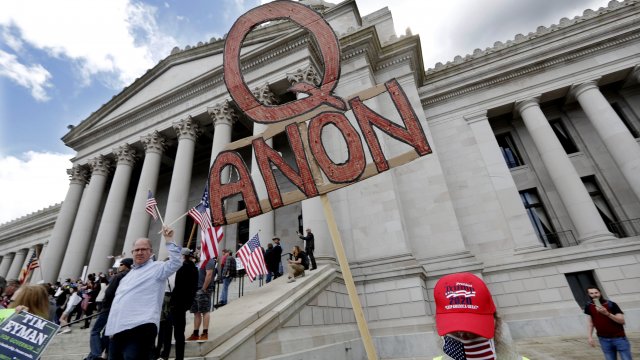 SMS
How Do Conspiracy Theories Get Their Traction?
By Newsy Staff
By Newsy Staff
May 10, 2022
Many conspiracy theories never gain traction or affect our lives. But some can catch fire on the internet, where false ideas spread fast.

There are always false, conspiratorial ideas out there.

According to a YouGov poll last year, some of these beliefs are still pretty popular.

27 percent of respondents say the government is hiding the existence of aliens. A fifth of Americans believe 9/11 was an inside job. A similar percentage believe that climate change is a hoax, or that the illuminati secretly control the world

A conspiracy theory can be defined as an explanation for events that relies on the assertion that powerful people are dishonestly manipulating society.

Many conspiracy theories never gain traction or affect our lives. But some can catch fire on the internet, where false ideas spread fast.

the WHO describes it as a time of an overabundance of information, not always accurate, that spreads alongside a disease outbreak.

The viral conspiracy theory first emerged in 2017, and is based on an idea that satan-worshipping pedophiles were controlling media and politics.

Followers believe that “Q” is a top-secret government official who posts on message boards about what believers consider is the “truth” behind what happens in the world.

The idea became woven into political debate as the conspiracy insisted former president Donald Trump was the one to take down this so-called “deep state.”

And it helped spread claims of a “rigged” 2020 presidential election, despite bipartisan state election authorities finding no evidence of fraud, even after multiple audits and recounts.

A December poll asked participants why Trump has said the 2020 election was rigged.

Three quarters of Republicans said it was "mostly because he was right," and that there was fraud. Only 2 per cent of Democrats agreed.

Some politicians have followed suit by seeking to appeal to Q-anon followers.

The watchdog group Media Matters for America has documented 60 current or former candidates for congress in 2022 who have given credence to the Q-anon conspiracy theory, or promoted its content.

From beliefs of rigged voting machines.. To the idea that Americans never landed on the moon, conspiracy theories survive, finding new audiences to buy in to false ideas – despite the evidence to the contrary.