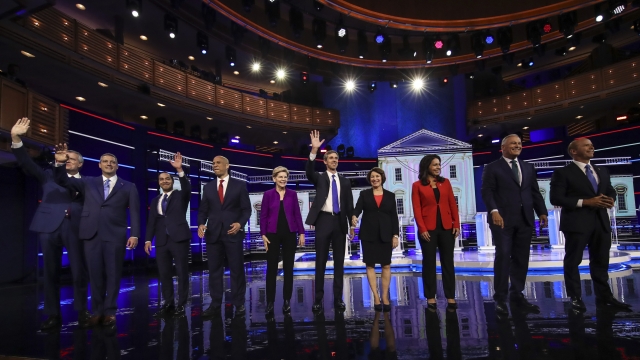 SMS
Democratic Candidates Have Promising Early Plans To Regulate Big Tech
By Tyler Adkisson
By Tyler Adkisson
June 28, 2019
While Democrats in the debates tend to have relatively similar ideas, one space in which they differ much more is in the regulation of big tech.
SHOW TRANSCRIPT

How to regulate the corporate power of tech giants like Amazon, Google and Facebook is still an open question, and getting more relevant as we get into the 2020 election season in earnest. It was one of the first things candidates talked about at the first democratic presidential debate on NBC News — even if the discussion was a little broad.

During the recent Democratic Debates, some of these candidates explained how and why these companies should be regulated, if at all. Sen. Cory Booker's approach focused mostly on reigning in corporate power of all sorts of different companies, not just specific tech companies.

BOOKER: "I will single out companies like Halliburton or Amazon that pay nothing in taxes and our need to change that. And when it comes to antitrust law, what I will do is, number one, appoint judges that will enforce it, number two, have a DOJ and a Federal Trade Commission that will go through the processes necessary to check this kind of corporate concentration."

Charlotte Slaiman, Competition Policy Counsel for online advocacy group Public Knowledge, says this strategy could have more teeth than the status quo. Judges hold a lot of power over the scope of antitrust.

"Our antitrust enforcement agencies have to bring cases to the courts," Slaiman said. "So when you have judges that really want to take a narrow view of antitrust law, that's one of the reasons antitrust has been narrowed over the last few decades."

Sen. Elizabeth Warren has the most comprehensive and targeted plan to regulate big tech so far. She's called for limiting the ability to buy up companies, like Facebook did with Instagram and WhatsApp, and Amazon with Whole Foods and Zappos. Debate moderators asked Warren if she was unfairly targeting big economic players.

GUTHRIE: Are you picking winners and losers?

WARREN: So the way I understand this, it's there is way too much consolidation now in giant industries in this country. That hurts workers. It hurts small businesses. It hurts independent farmers. It hurts our economy overall.

Slaiman says that from an antitrust perspective, that's on the right track.

"I think she’s hit on a really important problem, which is vertical integration. The power that companies have when they also own one of their own customers. This can create some bad incentives to preference your own customers over what are effectively your competitors … We may find that a non-discrimination standard is actually sufficient to solve this problem, or we may not."

Slaiman says the first debates were a good next step in the antitrust discussion — but it's still early in the race. Not every candidate has laid out specific plans yet, and we'll need those details to know which candidates' plans are likely to stick.