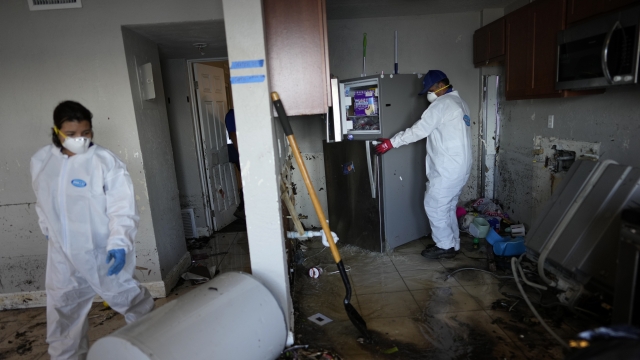 Hurricane Ian is gone and recovery has started. But the mental health harm for many hurricane survivors is just beginning.

Paul Benedetti rode out the storm with his two elderly parents and one of their elderly friends during the storm.

"It was scary as hell. We were all ready to die here and we were literally saying goodbye to each other," said Benedetti.

He says they floated on mattresses as water filled the house up to their necks.

"I just want to cry thinking about it. Scary. Very scary. That was one way I never wanted to die. I was drowning and I couldn't do anything to help anybody. The variability in response to these kinds of events is very vast," said Holman. They say acute stress disorder is the most common negative mental health response after hurricanes. Think of it as early PTSD where it is hard for someone to function.

"You might experience being startled, anxiety, nightmares, re-experiencing, feeling like the events happening again. You could experience it with dissociation symptoms, so feeling like you're out of your body and so forth," said Garfin.

That can eventually lead to long-term anxiety or depression, PTSD or even suicide in some cases. A 2020 study found overall suicide rates increased by 23% in the months after natural disasters. Hurricane news consumption contributes to mental health damage, too.

Someone with a mental health diagnosis or a person who's lived through a hurricane is more at risk for negative mental health impacts. Secondary trauma, which is suffering after witnessing others' distress is also common in first responders, health care providers and journalists.

For those on the ground now: experts say they should be letting stressed survivors process that in time, but have compassion and help should someone need it in the moment.

"We don't want it to broadly force people to be reliving a traumatic event when they're still in that early phase and they may recover or heal over time. You know, at the same time, we want to have resources available to people," said Garfin. "It's really important that people have mental health first aid available to them. Especially if it's done in a really compassionate way. It's going to help bring people back from the edge of having too many symptoms, mental health symptoms."